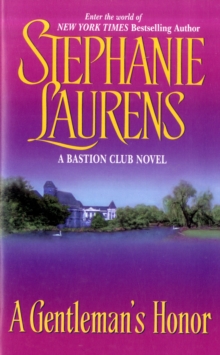 Product Description The Season has yet to begin, and the second member of the Bastion Club, tall, handsome Anthony Blake, Viscount Torrington, is already a target for every matchmaking mama in London. None of their flighty daughters can fix his interest, but a certain lady does... Alicia is living a deception. Desperation has caused the determined but penniless lady to boldly launch her ravishing younger sister into the ton and have her make a spectacular match. By masquerading as the widowed "Mrs. Carrington" Alicia can act as the perfect chaperoneâ€¦but fashionable ladies are not accused of murder... When Tony Blake discovers Alicia standing over a dead body in his godmotherâ€™s garden, every instinct tells him she is innocent. His connections allow him to take control of the investigation, his social prominence provides her public support, but it is more than honor that compels him to protect her and to do everything in his seductive power to make her his. From Publishers Weekly In this steamy Regency, the second in Laurens's new Bastion Club series (following The Lady Chosen), Lord Anthony Blake, a former spy for England, finds himself at loose ends after the fall of Napoleon. Genteel widow Alicia Carrington, who's in London to chaperone her younger sister, puts an end to Anthony's ennui when she stumbles upon a dead body at a soiree and he stumbles upon her at the same time. A mysterious villain seems determined to frame Alicia for the murder, but the real danger lies in the secret she's hiding from everyone-including Anthony, who quickly insinuates himself into her life. As in all of Laurens's romances, the love scenes are passionate, and chemistry hums between the pair. Alicia is a classic Laurens heroine: plucky and determined. Anthony is high-handed at times but not offensively so. Although the romantic tension relies heavily on a few unspoken words, it's entertaining to watch the baffled couple finally admit to their feelings. Unfortunately, the mystery subplot is less compelling, depending as it does on following a paper trail that offers up little drama. Still, Laurens's fans should be more than satisfied with this heady tale. Copyright 2003 Reed Business Information, Inc. About the Author #1 New York Times bestselling author Stephanie Laurens began writing as an escape from the dry world of professional science, a hobby that quickly became a career. Her novels set in Regency England have captivated readers around the globe, making her one of the romance world's most beloved and popular authors.