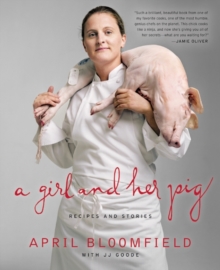 A GIRL AND HER PIG: RECIPES AND STORIES

Product Description April Bloomfield, the critically acclaimed chef behind the smash hit New York restaurants The Spotted Pig, The Breslin, and the John Dory, offers incomparable recipes and fascinating stories in this one-of-a-kind cookbook and memoir that celebrates all things pork and more. A Girl and Her Pig is a carnivoreâ€™s delight, a gift from one of the food industryâ€™s hottest chefsâ€”in the upper echelon alongside Mario Batali, David Chang, and the legendary Fergus Hendersonâ€”featuring beautiful illustrations and photographs, and refreshingly unpretentious, remarkably scrumptious recipes for everything from re-imagined British pub favorites such as Beef and Bayley Hazen Pie to Whole Suckling Pig. From the Back Cover In A Girl and Her Pig, April Bloomfield takes home cooks on an intimate tour of the food that has made her a star. Thoughtful, voice-driven recipes go behind the scenes of Bloomfield's lauded restaurantsâ€”The Spotted Pig, The Breslin, and The John Doryâ€”and into her own home kitchen, where her attention to detail and reverence for honest ingredients result in unforgettable dishes that reflect her love for the tactile pleasures of cooking and eating. Bloomfield's innovative yet refreshingly straightforward recipes, which pair her English roots with a deeply Italian influence, offer an unfailingly modern and fresh sensibility and showcase her bold flavors, sensitive handling of seasonal produce, and nose-to-tail ethos. A cookbook as delightful and lacking in pretention as Bloomfield herself, A Girl and Her Pig combines exquisite food with charming narratives on Bloomfield's journey from working-class England to the apex of the culinary world, along with loving portraits of the people who have guided her along the way. About the Author April Bloomfield is the executive chef and co-owner of the Michelin- starred The Spotted Pig, The Breslin, The John Dory, Tosca, and Salvation Taco restaurants. She won the 2014 James Beard Award for Best Chef in New York and was nominated for an Emmy for cohosting the second season of the PBS show Mind of a Chef. A native of Birmingham, England, she lives in New York City.