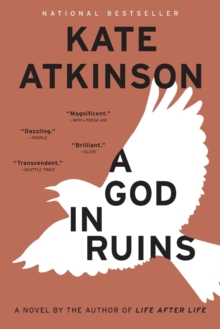 A GOD IN RUINS: A NOVEL

Product Description This stunning companion to Kate Atkinson's #1 bestseller Life After Life, "one of the best novels I've read this century" (Gillian Flynn), follows Ursula's brother Teddy as he navigates an unknown future after a perilous war. "He had been reconciled to death during the war and then suddenly the war was over and there was a next day and a next day. Part of him never adjusted to having a future." Kate Atkinson's dazzling Life After Life explored the possibility of infinite chances and the power of choices, following Ursula Todd as she lived through the turbulent events of the last century over and over again. A God in Ruins tells the dramatic story of the 20th Century through Ursula's beloved younger brother Teddy -- would-be poet, heroic pilot, husband, father, and grandfather -- as he navigates the perils and progress of a rapidly changing world. After all that Teddy endures in battle, his greatest challenge is living in a future he never expected to have. An ingenious and moving exploration of one ordinary man's path through extraordinary times, A God in Ruins proves once again that Kate Atkinson is one of the finest novelists of our age. Review "A novel so sublime I would nominate it to represent all books in the Art Olympics. The afterword deserves a literary prize all to itself. It is, as claimed on the sumptuous proof, even better than Life After Life."? The Bookseller "Only as the book unfolds is each character more fully revealed. Ms. Atkinson's artistry in making this happen is marvelously delicate and varied." ? Janet Maslin, New York Times "If you loved Atkinson's Life After Life, you're in luck. If you're one of the, say, five people who didn't read it: You're still in luck--Atkinson is a master at the top of her game. A quiet, moving portrait of a guy navigating life's small pleasures and painful failures."? Marie Claire "Gorgeous, thought-provoking...once again, Atkinson explores the concept of paths not taken versus those that are. Her hero's journey has its trials...but also joys and deep love. Quiet, humble Teddy is easy to root for. At the end of this tender story (a weeper, by the way), you won't want to let him go." ? Good Housekeeping "Dazzling." ? People "A sprawling, unapologetically ambitious saga that tells the story of postwar Britain through the microcosm of a single family, and you remember what a big, old-school novel can do." ? Tom Perotta, New York Times Book Review "Atkinson's genre-bending novels have garnered critical praise, but nothing on the order of a Rushdie, or even an Ian McEwan. A God in Ruins should change that."? Amy Gentry, The Chicago Tribune "Atkinson writes the way LeBron dunks or Stephen Hawking theorizes; she can't help but be brilliant." ? Leah Greenblatt, Entertainment Weekly "Transcendent." ? Moira Macdonald, The Seattle Times "A staggeringly gorgeous book, offering through the story of one small, good, imperfect life, the chance to grieve and cherish so many more." ? Ellis Avery, Boston Globe About the Author Kate Atkinson's first novel, Behind the Scenes at the Museum, was named England's Whitbread Book of the Year in 1996. Since then, she has written eleven more ground-breaking, bestselling books. She lives in Edinburgh, Scotland.