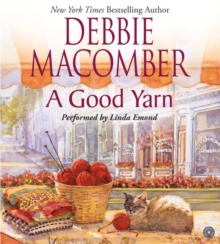 Product Description You might have heard about a wonderful little yarn store in downtown Seattle. Debbie Macomber can take you there! In the year since it opened, A Good Yarn has thrived -- and so has Lydia Hoffman, the owner. A lot of that is due to Brad Goetz. But when Brad's ex-wife reappears, Lydia is suddenly afraid to trust her newfound happiness. Elise Beaumont joins one of Lydia's popular knitting classes. Living with her daughter, Aurora, Elise learns that her onetime husband plans to visit and that Aurora wants a relationship with her father, regardless of how Elise feels about him. Bethanne Hamlin is facing the fallout from a divorce and joins the knitting class as the first step in her effort to recover a sense of dignity and hope. Courtney Pulanski is a depressed and overweight teenager. She's staying with her grandmother, who's trying to help by taking her to the knitting class at A Good Yarn. Four women, brought together by the craft of knitting, find companionship and comfort in each other. Who would've thought that knitting socks could change your life? Performed by Linda Emond About the Author Debbie Macomber has more than 100 million copies of her books in print, and her stories about home and family have a worldwide audience and have been translated into twenty-three languages. In addition to being a #1 New York Times bestseller in fiction many times over, she also has an enormous following among knitters as the author of dozens of pattern and craft books. In 2008, she launched a branded line of knitting products through Leisure Arts, the company that publishes her knitting guides. Debbie and her husband, Wayne, have four children and nine grandchildren, and split their time between Washington State and Florida. This is Debbieâ€™s second picture book co-authored with Mary Lou Carney; their first, The Truly Terribly Horrible Sweaer . . . That Grandma Knit, was published in 2009. Linda Emond's credits include The Sopranos, all four Law & Orders, and American Experience: John & Abigail Adams. On Broadway: 1776 and Life x 3 (TonyÂ® nomination, Outer Critics Circle Award). Off-Broadway appearances include Tony Kushner's Homebody/Kabul (Lucille Lortel Award, Obie Award). From AudioFile Lydia Hoffman opens a knitting shop where she also holds knitting classes. Participants include Eloise, a retired librarian, Courtney, a lonely teenager, and Bethanne, a single mother. Narrator Linda Emond imbues this audio with a sense of realism as her carefully modulated pitch changes reflect the various characters and their range of emotions. Emond provides each character with a distinctive voice, including those of Lydia's boyfriend, Brad, with his mellifluous tone, and Eloise's ex-husband, Maverick, who exudes charm with every word. Emond's expert storytelling highlights each character's ability to reinvent him or herself. The narrator's smooth, well-tempered pacing establishes this audio as an experience to be savored. S.M. 2006 Audie Award Finalist Â© AudioFile 2006, Portland, Maine-- Copyright Â© AudioFile, Portland, Maine