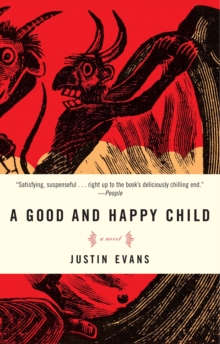 A GOOD AND HAPPY CHILD: A NOVEL

Product Description A young man reexamines his childhood memories of strange visions and erratic behavior to answer disturbing questions that continue to haunt him and his new family in this psychological thriller named a Washington Post best book of 2007. Thirty-year-old George Davies canâ€™t bring himself to hold his newborn son. After months of accepting his lame excuses and strange behavior, his wife has had enough. She demands that he see a therapist, and George, desperate to save his unraveling marriage and redeem himself as a father and husband, reluctantly agrees. As he delves into his childhood memories, he begins to recall things he hasnâ€™t thought of in twenty years. Events, people, and strange situations come rushing back. The odd, rambling letters his father sent home before he died. The jovial mother who started dating too soon after his fatherâ€™s death. A boy who appeared one night when George was lonely, then told him secrets he didnâ€™t want to know. How no one believed this new friend was real and that he was responsible for the bad things that were happening. Terrified by all that he has forgotten, George struggles to remember what really happened in the months following his fatherâ€™s death. Were his ominous visions and erratic behavior the product of a grief-stricken childâ€™s overactive imagination? Or were his fatherâ€™s colleagues, who blamed a darker, more malevolent force, right to look to the supernatural as a means to end Georgeâ€™s suffering? Twenty years later, George still does not know. But when a mysterious murder is revealed, remembering the past becomes the only way George can protect himself--and his young family. A psychological thriller in the tradition of Donna Tarttâ€™s The Secret History--with shades of The Exorcist--A Good and Happy Child leaves you questioning the things you remember and frightened of the things youâ€™ve forgotten. â€œBeautifully written and perfectly structured. . . . This novel is much more than The Omen for the latte generation, and Evans cleverly subverts expectations at every turn.â€ â€“Washington Post â€œ[A] satisfying, suspenseful first novel. . . . Young Georgeâ€™s intriguing story unbalances the reader right up to the bookâ€™s deliciously chilling end.â€â€”Peopleâ€œA scary, grown-up ghost story that combines Southern gothic with more than a twist of The Exorcist. . . . Combine[s] mind-bending storytelling with excellent prose.â€â€”Portland Tribuneâ€œThink Rosemaryâ€™s Babyâ€”plus . . . told in the kind of prose that mesmerizes, sweeping the reader along so fast that thereâ€™s no time to ask questions.â€ â€”Hartford Courantâ€œ[A] dazzling debut . . . part psychological thriller, part horror story.â€ â€”Chicago Tribuneâ€œRelat[es] his otherworldly suspense story with the cool, calm eye of a skeptic.â€â€”Entertainment Weekly (Aâ€”) Review â€œEvans exorcises the demons of adolescence in his smart psychological thriller.â€ â€” Vogue â€œ[A] satisfying, suspenseful first novel. . . . Young Georgeâ€™s intriguing story unbalances the reader right up to the bookâ€™s deliciously chilling end.â€ â€” People â€œA psychological thriller that keeps the reader on edge until the last page. . . . A haunting story.â€ â€” Kirkus Reviews (starred review) â€œThis stunning novel marks the debut of a serious talent. Evans manages to take a familiar concept and infuse it with psychological depth and riveting suspense. . . . Evans subtly evokes terror and anxiety with effective understatement. The intelligence and humanity of this thriller should help launch it onto bestseller lists.â€ â€” Publishers Weekly (starred review) â€œThis debut novel grips readers from the first chapter. . . . Evans delivers a creepy and entertaining story full of perfectly written characters.â€ â€” Library Journal (starred review) â€œThis is an edgy, compelling readâ€“more unnerving than scaryâ€“that will slide it hooks deep inside and throttle you more than a few times before itâ€™s all over.â€ â€” Booklist â€œ A Good and Happy Child is a rare achievement--a literary horror story that's deeply