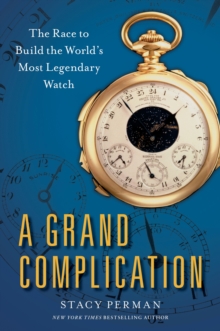 A GRAND COMPLICATION: THE RACE TO BUILD THE WORLD'S MOST LEGENDARY WATCH

Product Description New York Times bestselling author Stacy Perman chronicles the thrilling pursuit between two ambitious men in the early 1900s to possess the most complicated timepiece in history. Two wealthy, powerful men engage in a decades-long contest to create and possess the most remarkable watch in history. James Ward Packard of Warren, Ohio, was an entrepreneur and a talented engineer of infinite curiosity, a self-made man who earned millions from his inventions, including the design and manufacture of Americaâ€™s first luxury carâ€”the elegant and storied Packard. Henry Graves, Jr., was the very essence of blue-blooded refinement in the early 1900s: son of a Wall Street financier, a central figure in New York high society, and a connoisseur of beautiful thingsâ€”especially fine watches. Then, as now, expensive watches were the ultimate sign of luxury and wealth, but in the early twentieth century the limitless ambition, wealth, and creativity of these two men pushed the boundaries of mathematics, astronomy, craftsmanship, technology, and physics to create ever more ingenious timepieces. In any watch, features beyond the display of hours, minutes, and seconds are known as â€œcomplications.â€ Packard and Graves spurred acclaimed Swiss watchmaker Patek Philippe to create the Mona Lisa of timepiecesâ€”a fabled watch that incorporated twenty-four complications and took nearly eight years to design and build. For the period, it was the most complicated watch ever created. For years it disappeared, but then it surfaced at a Sothebyâ€™s auction in 1999, touching off a heated bidding war, shattering all known records when it fetched $11 million from an anonymous bidder. New York Times bestselling author Stacy Perman takes us from the clubby world of New York high society into the ateliers of the greatest Swiss watchmakers, and into the high-octane, often secretive subculture of modern-day watch collecting. With meticulous research, vivid historical details, and a wealth of dynamic personalities, A Grand Complication is the fascinating story of the thrilling duel between two of the most intriguing men of the early twentieth century. Above all, it is a sweeping chronicle of innovation, the desire for beauty, and the lengths people will go to possess it. From Booklist It was an arms race that came down to the ticking of minute and second hands. The duel between two wealthy Americans to build and own the greatest timepiece ever constructed is meticulously narrated by journalist Perman. Spanning the Gilded Age to the Great Depression, the story focuses on the competitors, James Ward Packard, who built the luxury-car company that bore his name, and financier Henry Graves Jr. The story will attract both watch enthusiasts and readers interested in the Gilded Age, as it examines the fascinating technological complexity of timepieces in the context of the eraâ€™s overall focus on progress. The book sometimes reads as a catalog of the competitorsâ€™ acquisitions, translating the prices into eye-dropping modern figures, but Permanâ€™s ability to enliven the narrative with sparkling historical detailsâ€”packs of dogs nipping at the wheels of the first Packardsâ€”enlivens the account considerably. The battle for ever-greater timepieces reflects the distinct characters of Packard and Graves, the brilliant engineer and the crushingly competitive heir, and pays homage to the crowning achievements of a lost world of wealth, privilege, and culture. --Bridget Thoreson Review "Stacy Perman has pulled off a remarkable feat in this book. In telling the story of the most complex watch ever made, she writes about a device that not only tells time with exquisite percision but also, in her capable hands, opens up a revealing window onto an entire age." (Toby Lester, author of The Fourth Part of the World and Da Vinci's Ghost) "A unique competition between two scions of the Gilded Age is the driver for this fresh look at the mores of the rich and powerful.