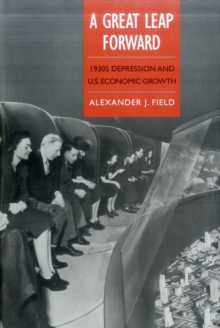 This bold re-examination of the history of U.S. economic growth is built around a novel claim, thatÂ productive capacityÂ grew dramatically across the Depression years (1929-1941) and that this advance provided the foundation for the economic and military success of the United States during the Second World War as well as for the golden age (1948-1973) that followed.
Alexander J. Field takes a fresh look at growth data and concludes that, behind a backdrop of double-digit unemployment, the 1930s actually experienced very high rates of technological and organizational innovation, fueled by the maturing of a privately funded research and development system and the government-funded build-out of the country's surface road infrastructure. This signficant new volume in the Yale Series in Economic and Financial History invites new discussion of the causes and consequencesÂ of productivity growth over the past century and a half and of our current prospects.