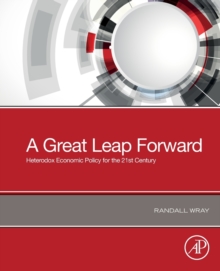 Product Description A Great Leap Forward: Heterodox Economic Policy for the 21st Century investigates economic policy from a heterodox and progressive perspective. Author Randall Wray uses relatively short chapters arranged around several macroeconomic policy themes to present an integrated survey of progressive policy on topics of interest today that are likely to remain topics of interest for many years. Review This integrated survey examines economic approaches to 21st century macroeconomic policies through a heterodox and progressive lens About the Author L. Randall Wray is a professor of Economics at Bard College and Senior Scholar at the Levy Economics Institute. Wray taught at the University of Missouriâ€“Kansas City from 1999 to 2016 and at the University of Denver from 1987 to 1999, and has been a visiting professor at the Universities of Paris and Rome (La Sapienza), as well as holding a variety of visiting positions in China, the Czech Republic, Brazil, Mexico, and Italy. From 1994 to 1995 he was a Fulbright Scholar at the University of Bologna, and he has recently completed a Fulbright Specialist Grant at the Tallinn University of Technology in Estonia. He has had a number of funded research grants from the Ford Foundation, from the Asian Development Bank, and from the Institute for New Economic Thinking. He holds a BA from the University of the Pacific and an MA and a Ph.D. from Washington University, where he was a student of Minsky. His recent publications include: A Great Leap Forward: Heterodox Economic Policy for the 21st Century; Macroeconomics; â€œMMT and Two Paths to Big Deficits?, Challenge; â€œCranks and heretics: the importance of an analytical framework? Cambridge Journal of Economics; Why Minsky Matters: An Introduction to the Work of a Maverick Economist; and Modern Money Theory: A Primer on Macroeconomics for Sovereign Monetary Systems. His books have been published in many languages, including Chinese, Spanish, Portuguese, Ukrainian, and Japanese.