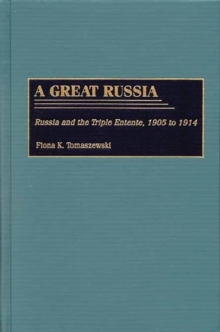 The Triple Entente of Great Britain, Russia, and France was the foreign policy prong of the Russian imperial government's reaction to the disastrous events of 1905, including the revolution and the near defeat in the Russo-Japanese War. This alignment with the two western, liberal powers was almost universally perceived within official Russian governing circles as a necessary, if ideologically distasteful, diplomatic relationship to offset the growing German threat on the continent. Maintaining the entente would help Russia retain its great power status. For the first time, Tomaszewski tells the official Russian side of the story, long inaccessible due to restrictions imposed by the relevant Russian archives during the Soviet era. In doing so, she sheds new light on the international scene as the crisis of World War One approached.

The Triple Entente went hand in hand with two policies of Stolypin, the Chairman of the Council of Ministers: draconian repression of the revolutionaries and sweeping domestic reforms. Acutely aware that serious failures in foreign policy would threaten the regime's existence, the imperial government designed both its foreign and its domestic policies to consolidate the autocracy for the twentieth century. Nicholas II gambled on the Triple Entente and its diplomatic alignment with the other two status-quo powers as the best means of preserving the peace in Europe and thereby preserving the imperial system as well.