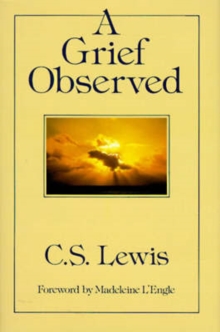 Product Description A classic work on grief, A Grief Observed is C.S. Lewisâ€™s honest reflection on the fundamental issues of life, death, and faith in the midst of loss. Written after his wifeâ€™s tragic death as a way of surviving the â€œmad midnight moments,â€ A Grief Observed an unflinchingly truthful account of how loss can lead even a stalwart believer to lose all sense of meaning in the universe, and the inspirational tale of how he can possibly regain his bearings.Â  From the Back Cover Written with love, humility, and faith, this brief but poignant volume was first published in 1961 and concerns the death of C. S. Lewis's wife, the American-born poet Joy Davidman. In her introduction to this new edition, Madeleine L'Engle writes: "I am grateful to Lewis for having the courage to yell, to doubt, to kick at God in angry violence. This is a part of a healthy grief which is not often encouraged. It is helpful indeed that C. S. Lewis, who has been such a successful apologist for Christianity, should have the courage to admit doubt about what he has so superbly proclaimed. It gives us permission to admit our own doubts, our own angers and anguishes, and to know that they are part of the soul's growth." Written in longhand in notebooks that Lewis found in his home, A Grief Observed probes the "mad midnight moments" of Lewis's mourning and loss, moments in which he questioned what he had previously believed about life and death, marriage, and even God. Indecision and self-pity assailed Lewis. "We are under the harrow and can't escape," he writes. "I know that the thing I want is exactly the thing I can never get. The old life, the jokes, the drinks, the arguments, the lovemaking, the tiny, heartbreaking commonplace." Writing A Grief Observed as "a defense against total collapse, a safety valve," he came to recognize that "bereavement is a universal and integral part of our experience of love." Lewis writes his statement of faith with precision, humor, and grace. Yet neither is Lewis reluctant to confess his continuing doubts and his awareness of his own human frailty. This is precisely the quality which suggests that A Grief Observed may become "among the great devotional books of our age." About the Author Clive Staples Lewis (1898-1963) was one of the intellectual giants of the twentieth century and arguably one of the most influential writers of his day. He was a Fellow and Tutor in English Literature at Oxford University until 1954, when he was unanimously elected to the Chair of Medieval and Renaissance Literature at Cambridge University, a position he held until his retirement. He wrote more than thirty books, allowing him to reach a vast audience, and his works continue to attract thousands of new readers every year. His most distinguished and popular accomplishments include Out of the Silent Planet, The Great Divorce, The Screwtape Letters, and the universally acknowledged classics The Chronicles of Narnia. To date, the Narnia books have sold over 100 million copies and have been transformed into three major motion pictures. Clive Staples Lewis (1898-1963) fue uno de los intelectuales mÃ¡s importantes del siglo veinte y podrÃ­a decirse que fue el escritor cristiano mÃ¡s influyente de su tiempo. Fue profesor particular de literatura inglesa y miembro de la junta de gobierno en la Universidad Oxford hasta 1954, cuando fue nombrado profesor de literatura medieval y renacentista en la Universidad Cambridge, cargo que desempeÃ±Ã³ hasta que se jubilÃ³. Sus contribuciones a la crÃ­tica literaria, literatura infantil, literatura fantÃ¡stica y teologÃ­a popular le trajeron fama y aclamaciÃ³n a nivel internacional. C. S. Lewis escribiÃ³ mÃ¡s de treinta libros, lo cual le permitiÃ³ alcanzar una enorme audiencia, y sus obras aÃºn atraen a miles de nuevos lectores cada aÃ±o. Sus mÃ¡s distinguidas y populares obras incluyen Las CrÃ³nicas de Narnia, Los Cuatro Amores, Cartas del Diablo a Su Sobrino y Mero Cristianismo.