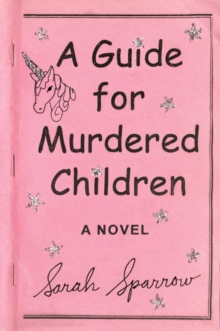 A GUIDE FOR MURDERED CHILDREN: A NOVEL

Product Description "In her astonishing thriller, Sarah Sparrow has joined the ranks of Shirley Jackson and Stephen King. A warning: there is no safe place to read this book." â€“David Cronenberg Â  Terrifying, thoroughly original and hauntingly written, A Guide for Murdered Children is a psychological thrillerâ€”and otherworldly surprise. Â  Weâ€™ve heard it said that there is no justice in this world. But what if there really was? What if the souls of murdered children were able to briefly return, inhabit adult bodies and wreak revenge on the monstrous killers who stole their lives? Â  Such is the unthinkable mystery confronting ex-NYPD detective Willow Wylde, fresh out of rehab and finally able to find a job running a Cold Case squad in suburban Detroit. When the two rookie cops assigned to him take an obsessive interest in a decades-old disappearance of a brother and sister, Willow begins to suspect something out of the ordinary is afoot. And when he uncovers a series of church basement AA-type meetings made up of the slain innocents, a new way of looking at life, death, murder â€”and missed opportunities â€”is revealed to him. Â  Mystical, harrowing and powerfully moving, A Guide for Murdered Children is a genre-busting, mind-bending twist on the fine line between the ordinaryâ€¦ and the unfathomable. About the Author Sarah Sparrow lives in Los Angeles. Excerpt. Â© Reprinted by permission. All rights reserved. ***This excerpt is from an advance uncorrected copy proof*** Copyright Â© 2018 Sarah Sparrow Â  Wickenburg, Arizona Present Day Â  Â  WATCHING THE DETECTIVE In rehab nowâ€” â€”again. Detective Willow Millard Wylde. Fifty?seven years old: shitty health and shaky spirits. Kind of a fattie . . . Which is usually what happens to him at the end of a run. He was drinking around the clock. Burning his fingers, his mattress, his couch, and his car seat with those bullshit alkie Marlboro Blacks. Burning down his anxieties and dreams. Chugalugging pain pills with Diet Dr Pepper from the moment he awakened to the moment he passed outâ€”and even in the middle of the night, after being startled to wakefulness by his own stertorous snores and otherworldly screams. No diabetesâ€”yet. No prostate cancerâ€”yet. (Though tests showed peskily chronic microscopic amounts of blood in the urine, etiology unknown.) Just some scabby, top of the head, sun?induced cancer, but no melanoma. Yet. Still no tangible signs of early?onset dementia . . . Cialis seemed to work most of the time for those few and far?between afternoon delights. Sometimes he had little romantic dates with himself when chemical enhancement wasnâ€™t required and performance wasnâ€™t the issue. But generally heâ€™s lost the urge. Generally lost all urge. Willow-that haunted half-oddity of an eccentric name that his grandÂ­ mother bestowed on him, a name he love-hated, a name he'd always been forced to explain (women were enthralled, men were suspect)-Willow WyÂ­lde, that complicated, beautiful, ruined American mythic thing: Washed-Up Cop. That luminous travesty of premium cable, movies and fiction, high and low: retired alcoholic homicide cop (one of his exes called him a "functional assaholic'), bruised and battered three-years-into-forced-retirement cop, unÂ­lucky in love, depressed, once flamboyant, once heroic cop, decorated then dirty then borderline absolved, now demolished, a revolving door AA member too played out to be a suicide threat. Friends used to arrive en masse to take his weapon away but after the first few interventions bailed in the ensuÂ­ing months then years of relapses. In time, "Dubya"-he had the nickname long before George Walker Bush but didn't mind sharing it (sometimes he just wasn't in the mood to be Willow)-alienated even his die-hard boosters. Their patience and goodwill expired, and they were dispatched or dispatched themselves from his life one by one. On this day, late June, in the Year of Our Damaged, Dysfunctional Lord: He walks from building to building in