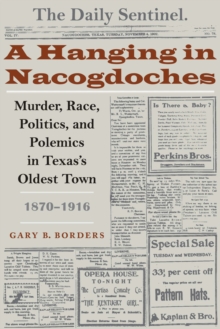 by: Gary B. Borders
Format: Paperback

On October 17, 1902, in Nacogdoches, Texas, a black man named James Buchanan was tried without representation, condemned, and executed for the murder of a white familyâ€”all in the course of three hours. Two white men played pivotal roles in these events: Bill Haltom, a leading local Democrat and the editor of the Nacogdoches Sentinel, who condemned lynching but defended lynch mobs, and A. J. Spradley, a Populist sheriff who, with the aid of hundreds of state militiamen, barely managed to keep the mob from burning Buchanan alive, only to escort him to the gallows following his abbreviated trial. Each man's story serves to illuminate a part of the path that led to the terrible parody of justice which lies at the heart of A Hanging in Nacogdoches.

The turn of the twentieth century was a time of dramatic change for the people of East Texas. Frightened by the Populist Party's attempts to unite poor blacks and whites in a struggle for economic justice, white Democrats defended their power base by exploiting racial tensions in a battle that ultimately resulted in the complete disenfranchisement of the black population of East Texas. In telling the story of a single lynching, Gary Borders dramatically illustrates the way politics and race combined to bring horrific violence to small southern towns like Nacogdoches.