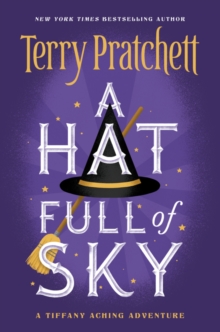 Product Description The second in a series of Discworld novels starring the young witch Tiffany Aching. Something is coming after Tiffany. . . . Tiffany Aching is ready to begin her apprenticeship in magic. She expects spells and magicâ€”not chores and ill-tempered nanny goats! Surely there must be more to witchcraft than this! What Tiffany doesn't know is that an insidious, disembodied creature is pursuing her. This time, neither Mistress Weatherwax (the greatest witch in the world) nor the fierce, six-inch-high Wee Free Men can protect her. In the end, it will take all of Tiffany's inner strength to save herself . . . if it can be done at all. Review â€œA masterpiece of comic fantasy. [Pratchettâ€™s] deep feeling for landscape, animals, kindness, and courage make his adventures deeply satisfying as well as clever.â€ (London Times) â€œWonderful language, genuinely scary explorations and a young girl whose growing up is believable and exciting.â€ ( Chicago Tribune) â€œThe humor races from cerebral to burlesque without dropping a stitch. Astonishing.â€ (Horn Book (starred review)) â€œTiffany is Hermione Granger, Gaimanâ€™s Coraline, and Pullmanâ€™s Lyra Belacqua rolled into one. A great adventure with plenty of magic and laughs.â€ (Voice of Youth Advocates (VOYA) (starred review)) â€œBy turns hilarious and achingly beautiful, this be just right.â€ ( Kirkus Reviews) â€œReaders will curl up to read with a sigh of contentment.â€ (Bulletin of the Center for Childrenâ€™s Books) â€œFull of irreverent humor, laugh-out-loud dialogue, and many memorable characters. Fans of the previous book are in for another treat.â€ (School Library Journal) From the Back Cover Witch-in-training Tiffany Aching hadn't expected magic to involve chores and ill-tempered nanny goats! But as Tiffany pursues her calling, a sinister monster pursues Tiffany, and neither Mistress Weatherwax (the greatest witch in the world) nor the six-inch-high Wee Free Men (the greatest thieves in the world) can defeat it. When the monster strikes, Tiffany will have to save herselfâ€”if she can be saved at all! About the Author Sir Terry Pratchett was the internationally bestselling author of more than thirty books, including his phenomenally successful Discworld series. His young adult novel, The Amazing Maurice and His Educated Rodents, won the Carnegie Medal, and Where's My Cow?, his Discworld book for â€œreaders of all ages,â€ was a New York Times bestseller. His novels have sold more than seventyÂ fiveÂ million (give or take a few million) copies worldwide. Named an Officer of the British Empire â€œfor services to literature,â€ Pratchett lived in England. He died in 2015 at the age of sixty-six.