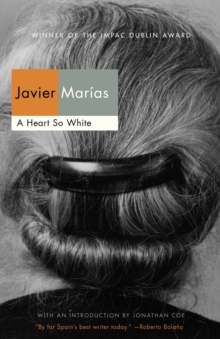 A HEART SO WHITE (VINTAGE INTERNATIONAL)

Product Description Winner of the IMPAC Dublin Award, and widely considered Javier MarÃ­as's masterpiece, A Heart So White is a breathtaking novel about family secrets that chronicles the relentless power of the past. Juan knows little of the interior life of his father Ranz; but when Juan marries, he begins to consider the past anew, and begins to ponder what he doesn't really want to know. Secrecy--its possible convenience, its price, and even its civility--hovers throughout the novel. A Heart So White becomes a sort of anti-detective story of human nature. Intrigue; the sins of the father; the fraudulent and the genuine; marriage and strange repetitions of violence: MarÃ­as elegantly sends shafts of inquisitory light into shadows and onto the costs of ambivalence. Review "By far Spain's best writer today." --Roberto BolaÃ±o "Brilliant. . . . An entertaining and intelligent novel." -- The Washington Post "The most subtle and gifted writer in contemporary Spanish literature." -- Boston Sunday Globe "MarÃ­as is simply astonishing." -- The Times Literary Supplement â€œMarÃ­as is one of the best contemporary writers.â€ â€”J. M. Coetzee "A great writer." --Salman Rushdie "One of the writers who should get the Nobel Prize is Javier MarÃ­as." --Orhan Pamuk "Stylish, cerebral...MarÃ­as is a startling talent...His prose is ambitious, ironic, philosophical, and ultimately compassionate." -- The New York Times â€œHis prose demonstrates an unusual blend of sophistication and accessibility.â€ â€” The New YorkerÂ  Â â€œJavier MarÃ­as is such an elegant, witty and persuasive writer that it is tempting simply to quote him at length.â€ â€” The Scotsman "MarÃ­as uses language like an anatomist uses the scalpel to cut away the layers of the flesh in order to lay bare the innermost secrets of that strangest of species, the human being." --W. G. Sebald "His prose possesses an exquisite, almost uncanny observation, recreating moments and moods in hypnotic depth." -- The Telegraph â€œJavier MarÃ­as is a novelist with style . . . His readers enter, through him, a strikingly and disturbingly foreign world.â€ â€”Margaret Drabble "A supreme stylist." -- The Times "MarÃ­as writes the kind of old-fashioned speculative prose we associate with Proust and Henry James. . . . Â But he also deals in violence, historical and personal, and in the movie titles, politicians, and brand-names and underwear we connect with quite a different kind of writer." -- The London Review of Books About the Author Javier MarÃ­as was born in Madrid in 1951. He has published ten novels, two collections of short stories and several volumes of essays. His work has been translated into thirty-two languages and won a dazzling array of internaÂ­tional literary awards, including the prestigious Dublin IMPAC award for A Heart So White. He is also a highly practiced translator into Spanish of English authors, including Joseph Conrad, Robert Louis Stevenson, Sir Thomas Browne and Laurence Sterne. He has held academic posts in Spain, the United States and in Britain, as Lecturer in Spanish Literature at Oxford University. Excerpt. Â© Reprinted by permission. All rights reserved. Excerpted from the Introduction I think it was Faulkner who once said that when you strike a match in a dark wilderness it is not in order to see anything better lighted, but just in order to see how much more darkness there is around. I think that literature does mainly that. It is not really supposed to â€˜answerâ€™ things, not even to make them clearer, but rather to explore â€“ often blindly â€“ the huge areas of darkness, and show them better. This was Javier MarÃ­asâ€™s response to an online interviewer who asked him, â€˜What is the purpose of writing?â€™, and it not only provides an unexpectedly lucid answer to that intimidating question; it also directly illuminates MarÃ­asâ€™s own practice, and that of A Heart So White in particular. For this is a novel which asks the profoundest, most unsettling questions about knowledge itself: