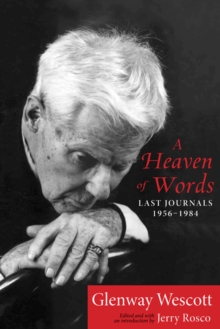 Product Description Charm, wit, compassion, wisdom, literature, nature, sex, humor, politics, sorrow, love: these themes fill the late journal pages of enigmatic American writer Glenway Wescott. From humble beginnings on a poor Wisconsin farm, Wescott went on to study at the University of Chicago, narrowly survive the Spanish flu pandemic, and eventually emerge as an influential poet and novelist. A major figure in the American literary expatriate community in Paris during the 1920s and a prominent American novelist in the years leading up to World War II, he spent a decade living abroad before relocating permanently to New York and New Jersey with his partner, Museum of Modern Art publications director and curator Monroe Wheeler. Â Â Â Â Â Â Â Â Â Â Â  Together they mixed with such intellectual and creative greats as Jean Cocteau, Colette, George Platt Lynes, Paul Cadmus, Somerset Maugham, Christopher Isherwood, Marianne Moore, W. H. Auden, Truman Capote, Joseph Campbell, and scores of other luminaries. During the second half of his life, Wescott wrote nonfiction essays and worked for the Academy Institute of Arts and Letters, all the while keeping journals in which he recorded the experiences that fostered his love of life, literature, the arts, and humanity. A Heaven of Words looks back on Wescott's entire fascinating life and reveals the riveting narrative of his last decades. Winner, Gay Memoir/Biography, Lambda Literary Awards Review "When a writer like Wescott is famous in youth, it is the later years that are often more fascinating."â€”Jonathan Gathorne-Hardy, author of Sex the Measure of All Things: A Life of Alfred C. Kinsey "A frank and insightful collection of later journals from a brilliant gay writer and Lost Generation survivor. Full of literary and sexual anecdotes, wise ruminations on the writer's craft, and poignant reflections on growing older as a writer and a lover of men, A Heaven of Words shows Wescott's Haymeadows home to be a microcosmic, literary Downton Abbey."â€”Kevin Bentley, author of Wild Animals I Have Known: Polk Street Diaries and After â€œFrank, honest, and fascinating, A Heaven of Words: Last Journals, 1956?1984 is highly recommended.â€â€” Midwest Book Review â€œThese entries are the work of a master of the craft of self-examination and reflection, written from the perspective of mature experience. Brilliantly edited and loaded with photographs, this volume goes on the shelf with the best of those writers we call The Lost Generation.â€â€” OutSmart Magazine â€œRoscoâ€™s selections reveal important information about Wescott yet allow Wescottâ€™s great ideas and minor foibles to become visible.â€â€” Lambda Literary Foundation About the Author Glenway Wescott (1901â€“1987) began his writing career as a poet but is best known for his short stories and novels, notably The Grandmothers (1927), The Pilgrim Hawk: A Love Story (1940), and Apartment in Athens (1945). Jerry Rosco is author of Glenway Wescott Personally: A Biography, also published by the University of Wisconsin Press, and coeditor of Continual Lessons: The Journals of Glenway Wescott, 1937â€“1955. He lives in New York City.