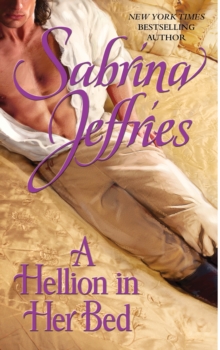 A HELLION IN HER BED (2) (THE HELLIONS OF HALSTEAD HALL)

Product Description Furious at his grandmotherâ€™s ultimatum to marry or lose his inheritance, Lord Jarret Sharpe wagers his luckâ€”and his heartâ€”at the card table against a most unlikely opponent. Mired in scandal after his parentsâ€™ mysterious deaths, notorious gambler Lord Jarret Sharpe agrees to tamely run the family brewery for a year if his Machiavellian grandmother rescinds her ultimatum that he marry. But the gambler in him canâ€™t resist when beguiling Annabel Lake proposes a wager. If she wins their card game, he must help save her familyâ€™s foundering brewery. But if he wins, she must spend a night in his bed. The outcome sets off a chain of events that threatens to destroy all his plans . . . and unveils the secret Annabel has held for so long. When Jarret discovers the darker reason behind her wager, he forces her into another oneâ€”and this time he intends to win not just her body, but her heart. From Booklist *Starred Review* As a successful gambler, Lord Jarret Sharpe knows a thing or two about risk, but his latest deal with his grandmother just might be his biggest bet yet. If Jarret can manage the family brewery for one year, his grandmother will not only excuse him from her mandate that all of her grandchildren marry within a year or be disinherited, Jarret will also gain permanent control of the brewery. Annabel Lake knows a thing or two about brewing beer. She runs her family brewery, and hopes that her plan to export her October ale to India will result in a tremendous financial windfall. But Annabel needs Jarretâ€™s help, and Jarret seems oddly disinterested, until Annabel comes up with a wager he simply cannot refuse. A perfectly matched pair of protagonists who engage in a spirited battle of wits and wiles, and a lively plot blending equal measures of steamy passion and sharp wit come together brilliantly in the second addition to Jeffriesâ€™ tempting new Hellions of Halstead Hall series. --John Charles About the Author Sabrina Jeffries is theÂ  New York TimesÂ andÂ  USA TODAYÂ bestselling author of several Regency-set historical romance series, including the Royal Brotherhood, the School for Heiresses, the Hellions of Halstead Hall, the Dukeâ€™s Men, and the Sinful Suitors. When sheâ€™s not writing in a coffee-fueled haze, sheâ€™s traveling with her husband, caring for her adult autistic son, or indulging in one of her passions: jigsaw puzzles, chocolate, music, and costume parties. With more than nine million books in print in twenty languages, the North Carolina author never regrets tossing aside a budding career in academics for the sheer joy of writing fun fiction and hopes that one day a book of hers will end up saving the world. She always dreams big. Excerpt. Â© Reprinted by permission. All rights reserved. A Hellion In Her Bed Chapter One London March 1825 In the nineteen years since that fateful night, Jarret had grown a foot taller and had learned how to fight, and he was still gambling. Now, for a living. Today, however, the cards were meant to be only a distraction. Sitting at a table in the study in Granâ€™s town house, he laid out another seven rows. â€œHow can you play cards at a time like this?â€ his sister Celia asked from the settee. â€œIâ€™m not playing cards,â€ he said calmly. â€œIâ€™m playing solitaire.â€ â€œYou know Jarret,â€ his brother Gabe put in. â€œNever comfortable without a deck in his hand.â€ â€œYou mean, never comfortable unless heâ€™s winning,â€ his other sister, Minerva, remarked. â€œThen he must be pretty uncomfortable right now,â€ Gabe said. â€œLately, all he does is lose.â€ Jarret stiffened. That was true. And considering that he supported his lavish lifestyle with his winnings, it was a problem. So of course Gabe was plaguing him about it. At twenty-six, Gabe was six years Jarretâ€™s junior and annoying as hell. Like Minerva, he had gold-streaked brown hair and green eyes the exact shade of their motherâ€™s. But that was the only trait Gabe shared with their straitlaced mother. â€œYou canâ€™t consistent