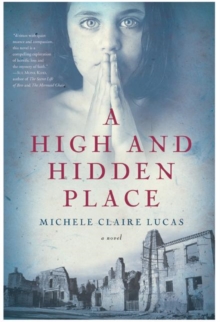 A HIGH AND HIDDEN PLACE: A NOVEL

Christine Lenoir's early childhood memories are vague. Told that her family perished of influenza, she grows up in the aftermath of World War II believing herself fortunate that her parents at least did not die violently, as so many did, and because she found a good and loving home. But after she witnesses the live telecast of Lee Harvey Oswald's murder, strange dreams and terrifying images begin to plague her. As her faint recollectionsof the horrors of her childhood become stronger, Christine embarks on a quest to discover what her visions mean. She ultimately unearths a history she never knew existed -- and one the world has largely forgotten. What follows is one woman's journey to the ruins of a small town called Oradour to find her truth and to reconcile her belief in God with the horrifying acts perpetrated against her family.

A High and Hidden Place is also a journey back to a day unlike any other -- June 10, 1944 -- when the citizens of a quiet French village were simply leading their lives, unaware that in a matter of hours they would meet their terrible fate.

At its heart, A High and Hidden Place is not only an unforgettable meditation on the aftermath of war, it is also the story of a young woman's search for her family, her beloved mother, and the history that continues to haunt us all.