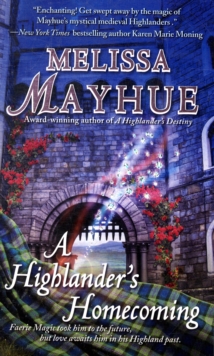 A HIGHLANDER'S HOMECOMING (DAUGHTERS OF THE GLEN, BOOK 6)

When Robert MacQuarrie was swept forward in time to present-day Scotland, he left behind in the thirteenth century a vow he could no longer keepâ€”to protect his friendâ€™s little daughter, Isabella. Haunted by guilt, he leaps at the chance to go backâ€¦except the fickle Faerie Magic returns him to his family castle twenty years after he left it. In Scotland, 1292, Isabella MacGahan is now a grown woman. Rejected by her family for her Faerie blood and uncanny powers, her safety depends on pretending that her magical abilities have made her mad. But appearances are deceiving for both Robbie and Isabella. Will the magic of the Fae allow them to find a true homecoming in each otherâ€™s arms??