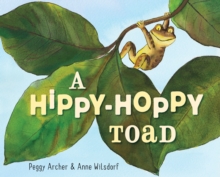 Product Description From the illustrator of the award-winning Sophie's Squash comes a rollicking read-aloud featuring a very tiny toad who gets displaced as animals--and humans--brush past him on the road. In the middle of a puddle in the middle of a road on a teeter-totter twig sat a teeny-tiny toad. Snap! went the twig! Up went the toad! And he landed on a tree by the side of the road. It's hard to be a tiny toad minding your own business on a twig. First a bird pecks at him. . . . Then a bee buzzes. . . . Then a dog barks . . . and so on. And each time the toad is surprised by a buzz or a woof (or the toe of a sneaker!), he hops to a new location farther down the road. With fun sounds, clever rhymes, and an irresistible rhythm, this is the perfect story for sharing one-on-one or in a group. From School Library Journal PreS-Gr 2â€”"In the middle of a puddle/in the middle of the road/on a teeter-totter twig/sat a teeny-tiny toad." No sooner are readers introduced to the smiling yellow toad than he's catapulted into an adventure: "SNAP! went the twig./UP! went the toad." It's the first of many abrupt transitions in the toad's cumulative, circuitous odyssey down a road and back again. Every shift in the action is marked with onomatopoeiaâ€”the toad hops, thumps, swooshes, and lots more besidesâ€”adding punch to the rhyming repetition of the text. Lively, textured illustrations, done in bold naturalistic colors, also enhance the action, spanning the gutter of every spread and establishing a pleasing sense not only of momentum but also of scale: this "teeny-tiny" toad is indeed dwarfed by nearly every animal and object he encounters. VERDICT A solid storytime pick; be prepared for repeat readings.â€”Rebecca Honeycutt, NoveList, Durham, NC Review "[Peggy Archer and Anne Wilsdorf] capture both the comedy and peril of the little toadâ€™s adventures in this wonderful read-aloud." â€” The Wall Street Journal About the Author Peggy Archer is the author ofÂ  Name that Dog: Puppy Poems from A to ZÂ and From Dawn to Dreams: Poems for Busy Babies, among other books.Â  A Hippy-Hoppy ToadÂ won the 2015 Society of Children's Book Writers and Illustrators Work-in-Progress Award. You can follow Peggy Archer on Twitter at @PeggyAArcher and visit her at peggyarcher.com. Anne Wilsdorf's illustrations forÂ  Sophie's SquashÂ were described as "bursting with color and energy on every page" in a starred review from Booklist. She has illustrated numerous books for children, including Sophie's Squash Go to School, the sequel to Pat Zietlow Miller'sÂ  Sophie's Squash, as well as Susan McElroy Montanari'sÂ  My Dog's a Chicken, Elizabeth Bluemle's Dogs on the Bed, Eileen Spinelli'sÂ  The Best Story, Sharon Arms Doucet'sÂ  Alligator Sue, and Lenore Look's Ruby Lu series.