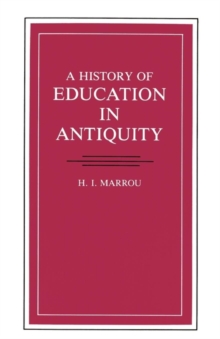 A HISTORY OF EDUCATION IN ANTIQUITY (WISCONSIN STUDIES IN CLASSICS)

Product Description H. I. Marrouâ€™s A History of Education in Antiquity has been an invaluable contribution in the fields of classical studies and history ever since its original publication in French in 1948. French historian H. I. Marrou traces the roots of classical education, from the warrior cultures of Homer, to the increasing importance of rhetoric and philosophy, to the adaptation of Hellenistic ideals within the Roman education system, and ending with the rise of Christian schools and churches in the early medieval period. Marrou shows how education, once formed as a way to train young warriors, eventually became increasingly philosophical and secularized as Christianity took hold in the Roman Empire. Through his examination of the transformation of Greco-Roman education, Marrou is able to create a better understanding of these cultures. Review â€œIn this survey, Professor Marrou of the Sorbonne traces the development of Greek education from Homer to the classical period of the Hellenistic age, which represents the high point of ancient education. He studies the Hellenistic period with great thoroughness using recent archaeological discoveries and his vast classical erudition to bring to light every detail of organization and method. Then he traces the further development of Roman and early Christian education up to the early Middle Ages.â€â€” Library Journal â€œHe has achieved a rare combination of good writing and masses of information, and in a series of additional notes discusses modern scholarship on the subject. This is a most valuable book.â€â€” Manchester Guardian â€œA triumph of humane scholarship, nothing less than a survey of education throughout the ancient world.â€â€” New Statesman & Nation About the Author H. I. Marrou (1904-1977) was considered to be one of the leading French historians of the mid-twentieth century. He is the author of numerous books, including, Time and Timeliness and The Meaning of History.