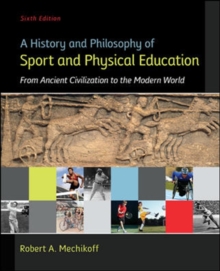 A HISTORY AND PHILOSOPHY OF SPORT AND PHYSICAL EDUCATION: FROM ANCIENT CIVILIZATIONS TO THE MODERN WORLD

Product Description Mechikoffâ€™s A History and Philosophy of Sport and Physical Education offers an engaging and informative overview of the philosophy of sport from Egypt to Ancient Greece and on to the present time. From Mesoamerica and Ancient Greece to the Olympic Games, the book touches on religion, politics, social movements, and individuals as they contributed to the development of sport and physical education. An extensive array of pedagogical tools--including timelines, comprehensive lists of chapter objectives, suggested websites, and discussion questions--aid the learning experience. Instructors and students can now access their course content through the Connect digital learning platform by purchasing either standalone Connect access or a bundle of print and Connect access. McGraw-Hill ConnectÂ® is a subscription-based learning service accessible online through your personal computer or tablet. Choose this option if your instructor will require Connect to be used in the course. Your subscription to Connect includes the following: â€¢ SmartBookÂ® - an adaptive digital version of the course textbook that personalizes your reading experience based on how well you are learning the content. â€¢ Access to your instructorâ€™s homework assignments, quizzes, syllabus, notes, reminders, and other important files for the course. â€¢ Progress dashboards that quickly show how you are performing on your assignments and tips for improvement. â€¢ The option to purchase (for a small fee) a print version of the book. This binder-ready, loose-leaf version includes free shipping. Complete system requirements to use Connect can be found here: http://www.mheducation.com/highered/platforms/connect/training-support-students.html About the Author Robert Mechikoff is a Professor in the Department of Exercise and Nutritional Sciences at San Diego State University where he has taught history of sport and philosophy courses since 1981. He received his BA in Political Science from Long Beach State University as well as his MA in Physical Education. Professor Mechikoff earned his Ph.D. from The Ohio State University where he studied history and philosophy. He coached football and swimming at both the high school and college level. Professor Mechikoff is an internationally recognized scholar, conducting extensive research and lecturing in the history and philosophy of the Ancient and Modern Olympic Games all over the world. He is a member of The Olympic Family, The International Society of Olympic Historians, and has served as Supervising Professor at the International Olympic Academy in Olympia, Greece on more then once occasion where he taught philosophy to graduate students from 25 different countries. In 1982, Professor Mechikoff served as Founding President and CEO of USA Volleyball (Menâ€™s Team). The U.S. Olympic Menâ€™s Team won the Gold Medal at the 1984 Los Angeles Olympiad. He is a frequent lecturer at the British Olympic Academy and numerous Olympic Academyâ€™s and Universities around the world. His interest in sport in antiquity, especially Greek athletics, is evident in his latest research. Since 2002 Professor Mechikoff has assisted in the work being conducted at the archeological site in Ancient Nemea, one of the four great athletic festivals of ancient Greece. He is a frequent visitor to the Olympic Museum and Studies Center in Lausanne, Switzerland and knows many members of the International Olympic Committee on a personal basis. Because of his international reputation as an Olympic Scholar, the International Olympic Committee awarded him the title of â€œDistinguished Guest of the IOCâ€ during the 2002 Salt Lake Winter Olympics. He is one of the few Kinesiology / Physical Education Professors who can (albeit with difficulty), translate ancient Greek from their original sources. He speaks and reads French, Modern Greek, Spanish, and Russian; one day he hopes to actually be able to understand what the French, Greek, Spanish, and Russians are s