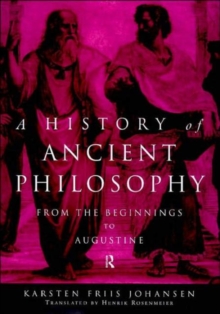 A HISTORY OF ANCIENT PHILOSOPHY: FROM THE BEGINNING TO AUGUSTINE

Product Description Translated by Henrik Rosenmeier, A History of Ancient Philosophy charts the origins and development of ancient philosophical thought. For easy reference, the book is divided chronologically into six main parts. The sections are further divided into philosophers and philosophical movements: *Pre-Socratic Philosophy, including mythology, the Pythagoreans and Parmenides *The Great Century of Athens, including the Sophists and Socrates *Plato, including The Republic, The Symposium and The Timaeus *Aristotle, including The Physics, The Metaphysics and The Poetics *Hellenistic Philosophy, including the Sceptics, the Stoics, the Epicureans and Cicero *Late Antiquity, including Neoplatonism, Origen and St Augustine. This comprehensive and meticulously documented book is structured to make ancient philosophical thought and ancient thinkers accessible. It contains: *full references to primary sources *detailed interpretations of key philosophical passages, including surveys of previous philosophical readings *an overview of the development of ancient philosophical thought *discussions of the relationships between philosophers and their ideas *analyses of key philosophical concepts and ideologies including ontology, epistemology, logic, semantics, moral and political philosophy, theology and aesthetics *explanations of Greek philosophical terminology. Review 'a successful and impressive book J. is undoubtedly a master of his subject, and writes in an uncomplicated manner that suggests confidence and enthusiasm about it.' - George Boys-Stones, University of Durham, UK