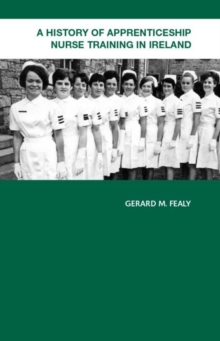 A HISTORY OF APPRENTICESHIP NURSE TRAINING IN IRELAND

Product Description Based on new research using previously unpublished sources, this compelling text is an in-depth study of the history of nurse education in Ireland, presenting a new authoritative account of the history of the traditional system of training in Ireland. Introduced as part of the reforms of hospital nursing in the late nineteenth century, apprenticeship nurse training was a vocational extension of secondary education. Residing outside the mainstream of higher educational provision it provided nurses with the knowledge and technical skills for sick nursing, whilst also functioning to socialise them into the role of hospital worker and introduce to them nursingâ€™s value systems. ThisÂ method of training provided a ready supply of skilled, efficient, inexpensive and loyal workers. In a chronological period spanning over a century, the book traces the development of modern nursing in Ireland, bringing the hidden role of nurses and nursing to the fore.Â It analyzes and describes the development, provision and gradual reform of hospital nursing, taking into account the social, cultural, political and economic factors that led to its establishment, its continuance, and eventual demise. Review Between the 1950's and 1990's, what Fealy surprises us with is how authorities continued to resist reducing the clinical hours stuident nurses maintained. In addition, he makes a strong arguement that the unwillingness to move nursing education out of the hospital only prolonged Ireland's failure to standardize nurse training. Dr Margaret Preston - Nursing History About the Author Gerard M. Fealy is a nurse historian and a senior lecturer in nursing at the School of Nursing and Midwifery, University College Dublin. His research interests include the history of nursing, curriculum policy and research methods. Dr Fealy is the editor of Care to Remember: Nursing and Midwifery in Ireland and the co-editor of Nursing Education in Drogheda, 1946-2004: A Commemorative History.