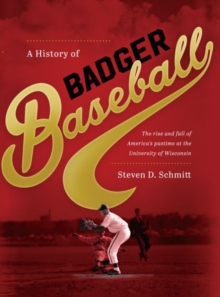 A HISTORY OF BADGER BASEBALL: THE RISE AND FALL OF AMERICA'S PASTIME AT THE UNIVERSITY OF WISCONSIN

Product Description For more than a century, the University of Wisconsin fielded baseball teams. This comprehensive history combines colorful stories from the archives, interviews with former players and coaches, a wealth of historic photographs, and the statistics beloved by fans of the game. The earliest intercollegiate varsity sport at Wisconsin, the baseball team was founded in 1870, less than a decade after the start of the Civil War. It dominated its first league, made an unprecedented trip to Japan in 1909, survived Wisconsin's chilly spring weather, two world wars, and perennial budget crises, producing some of the finest players in Big Ten history?and more than a few major leaguers. Fan traditions included torchlight parades, kazoos, and the student band playing "A Hot Time in the Old Town Tonight" as early as 1901. There is painful history here, too. African Americans played on Wisconsin's first Big Ten championship team in 1902, including team captain Julian Ware, but there were none on the team between 1904 and 1960. Heartbreaking to many fans was the 1991 decision to discontinue baseball as a varsity sport at the university. Today, Wisconsin is the only member of the Big Ten conference without a men's baseball team. Appendixes provide details of team records and coaches, All Big Ten and All American selections, Badgers in the major leagues, and Badgers in the amateur free-agent draft. Review "A remarkable and outstanding achievement. Here is Badger baseball season by season, the highlights, the heroes, and the drama from more than one hundred years of baseball." ?Bud Selig, former Commissioner of Baseball, from the foreword "A celebration of the history, tradition, and legacy of the now extinct Wisconsin Badgers baseball program that will ensure its spirit lives on for decades to come." ?William Povletich, author of Milwaukee Braves: Heroes and Heartbreak About the Author Steven D. Schmitt is a former news and sports reporter for several Wisconsin newspapers and radio stations. He writes the blog Home Run Historical Research and is a member of the Society for American Baseball Research, the Old-Time Ballplayers Association of Wisconsin, and the Milwaukee Braves Historical Association.