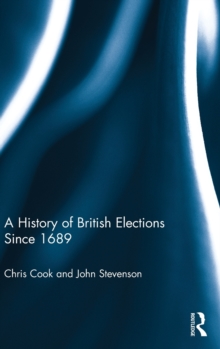 A HISTORY OF BRITISH ELECTIONS SINCE 1689

Product description A History of British Elections since 1689 represents a unique single-volume authoritative reference guide to British elections and electoral systems from the Glorious Revolution to the present day. The main focus is on general elections and associated by-elections, but Chris Cook and John Stevenson also cover national referenda, European parliament elections, municipal elections, and elections to the Welsh and Northern Irish assemblies and the Scottish parliament. The outcome and political significance of all these elections are looked at in detail, but the authors also discuss broader themes and debates in British electoral history, for example: the evolution of the electoral system, parliamentary reform, women's suffrage, constituency size and numbers, elimination of corrupt practices, and other important topics. The book also follows the fortunes not only of the major political parties but of fringe movements of the extreme right and left. Combining data, summary and analysis with thematic overviews and chronological outlines, this major new reference provides a definitive guide to the long and varied history of British elections and is essential reading for students of British political history. Review 'Chris Cook and John Stevenson, two of the most eminent historians of British history, have built up on the work of David Butler to produce the most comprehensive and incisive book on British elections currently available. It is a well researched and impressively written examination of British elections, of all types, covering the years from 1689. It is an essential read for all historians of British political and social history.' - Keith Laybourn, University of Huddersfield, UK 'Chris Cook and John Stevenson's A History of British Elections since 1689 is a vital resource for scholars of modern British history and politics as well as journalists and policymakers. In addition to reviewing each election result since 1689, the authors provide a useful glossary of political parties and a chronology of key development in the evolution of elections as well as an analysis of the historical development of Parliament, elections and electioneering.' - Neal McCrillis, Columbus State University, USA 'Belongs on the bookshelf of every teacher and student of modern British history. Complete and authoritative, the book brims with information for students of modern British politics and history.' - Kirk Willis, University of Georgia, USA 'This excellent and detailed overview of electoral activity and developments in the UK will be invaluable to anyone studying British political history. Summing Up: Highly recommended' - C. E. King, Iowa State University in CHOICE About the Author Chris Cook is a Visiting Fellow at the London School of Economics. His publications include By-Elections in British Politics with John Ramsden (1973), the Dictionary of Historical Terms (1998) and, most recently, The Routledge Guide to British Political Archives (2006), The Slump: Society and Politics in the Depression with John Stevenson (2009) and The Routledge Guide to European Political Archives (2012). John Stevenson was formerly Reader in Modern History at Worcester College, Oxford. His publications include The Routledge Companion to Britain in the Eighteenth Century and he has most recently edited the final volume of the English Historical Documents series, covering the years 1914-1957.