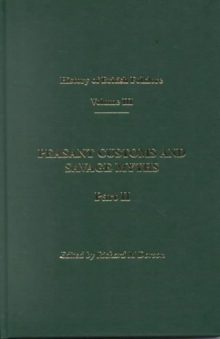 A HISTORY OF BRITISH FOLKLORE

This set re-issues classic works on folklore by Richard M. Dorson which trace the historical development of the idea of folklore from the sixteenth century to the First World War. The set also brings together theoretical writings from some of the most influential folklorists. The following titles are reprinted here: The British Folklorists 0-415-20476-3 Here Dorson explores the early origins of the folklore movement which became prominent in the Victorian period, but which originated in the sixteenth century. He shows how the influence of folklore extended to literature, history, the classics, archaeology, philology, physical research and legal and medical antiquities. Peasant Customs and Savage Myths, Volume I: 0-415-20477-1 and Volume II: 0-415-20478-X These two companion volumes bring together the theoretical writings of some of the most brilliant folklorists, including Andrew Lang, Sidney Hartland, George Laurence Gomme, Alfred Nutt and Joseph Jacobs. The subjects they discuss range from the origin and dispersion of the Aryans to the animistic philosophy of 'savages' and the survivals of primitive beliefs among peasants.