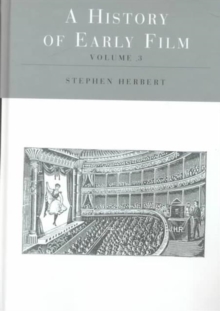 A HISTORY OF EARLY FILM

Product Description 'Early Film' is generally taken to cover the period of invention (early 1890s) to the First World War. During the past twenty years, early film has become a sophisticated area of cinema studies, with its own methodology. This collection is taken from a British perspective and includes: * The Cinema - Its Present Position and Future Possibilities: A report to the cinema Commission of Enquiry (Williams & Norgate, 1917). This substantial and wide-ranging report, from the end of the Early Cinema period, provides a unique record of the attitudes towards the cinema by its British audiences, exhibitors, producers, the clergy and guardians of morality, and those responsible for licensing. Considerable coverage is given to such subjects as: lighting in cinemas (an encouragement to immoral activity); whether villainous deeds depicted on screen influence young members of the audience; and the reasons for the very high percentage of American films shown. Also included is a chapter from Vachel Lindsay's The Art of the Moving Picture (1915, reprinted 1970s but now out of print). This early book of film theory and criticism was published just at the time that short films had largely given way to feature-length productions. Lindsay compares what he bravely considers a new art form - moving pictures - with established artistic media This three volume set vividly illustrates the roots of the twentieth century phenomenon of film and the cinema. The re-production of these important contemporary sources, now unavailable in print, provides the student and film aficionado with an invaluable resource. Review 'This is an utterly engaging and valuable collection of early British film documents. Highly recommended for comprehensive film-history collections serving upper-divison undergraduates, researchers, faculty, and general readers.' - Choice