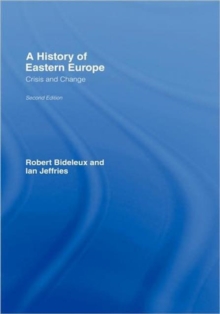 A HISTORY OF EASTERN EUROPE: CRISIS AND CHANGE

This welcome second edition of A History of Eastern Europe provides a thematic historical survey of the formative processes of political, social and economic change which have played paramount roles in shaping the evolution and development of the region. Subjects covered include: Eastern Europe in ancient, medieval and early modern times the legacies of Byzantium, the Ottoman Empire and the Habsburg Empire the impact of the region's powerful Russian and Germanic neighbours rival concepts of 'Central' and 'Eastern' Europe the experience and consequences of the two World Wars varieties of fascism in Eastern Europe the impact of Communism from the 1940s to the 1980s post-Communist democratization and marketization the eastward enlargement of the EU. A History of Eastern Europe now includes two new chronologiesÂ â€“ one for the Balkans and one for East-Central Europe â€“ and a glossary of key terms and concepts, providing comprehensive coverage of a complex past, from antiquity to the present day.