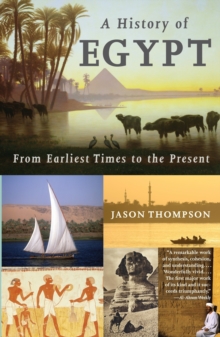 A HISTORY OF EGYPT: FROM EARLIEST TIMES TO THE PRESENT

Product Description In A History of Egypt , Jason Thompson has written the first one-volume work to encompass all 5,000 years of Egyptian history, highlighting the surprisingly strong connections between the ancient land of the Pharaohs and the modern-day Arab nation.Â  No country's past can match Egypt's in antiquity, richness, and variety. However, it is rarely presented as a comprehensive panorama because scholars tend to divide it into distinct erasâ€”prehistoric, pharaonic, Greco-Roman, Coptic, medieval Islamic, Ottoman, and modernâ€”that are not often studied in relation to one another. In this daringly ambitious project, drawing on the most current scholarship as well as his own research, Thompson makes the case that few if any other countries have as many threads of continuity running through their entire historical experience. With its unprecedented scope and lively and readable style, A History of Egypt offers students, travelers, and general readers alike an engaging narrative of the extraordinarily long course of human history by the Nile.Â  From Booklist Intended to offer travelers especially a basic background in Egyptian history, Thompsonâ€™s survey fluidly relates thousands of years of time. Acquainting readers with the conventional divisions of pharaonic Egypt into the Old, Middle, and New Kingdoms, Thompson highlights important events, or perhaps more saliently to visitors, the monuments built by the sequence of dynasties. From Egyptâ€™s conquest by Alexander the Great in 332 BCE, Thompson emphasizes that foreigners ruled the country continuously until 1952, legating layers of history with enduring visibility in Egyptian society, such as Christianity, Islam, and modernity. A strong aspect of the narrative, Thompsonâ€™s explanations of transitions in the governance of Egypt combine the political details with consideration of the tactics that would win peopleâ€™s acceptance of a change in regime. Throughout the work, Egyptâ€™s unusual geographyâ€”its dependence on the Nile River, its isolation by desertsâ€”never strays far from the authorâ€™s narrative, just as today most Egyptians live, as they always have, within miles of the Nileâ€™s banks. Integrating such elements with clarity and perspective, Thompson provides an excellent introduction to Egyptian history. --Gilbert Taylor Review "A remarkable work of synthesis, cohesion, and understanding.... Wonderfully vivid.... Extremely readable.... This is the first major work of its kind and it succeeds triumphantly." â€”Al-Ahram Weekly"Full of insights.... Thompson's tone suggests a deep respect for Egypt and its history.... Packing it all into one book without any major errors of omission or emphasis requires considerable skill and breadth of vision." â€”Daily News Egypt About the Author Jason Thompson is a professor of Middle Eastern Studies at Colby College. Excerpt. Â© Reprinted by permission. All rights reserved. THE GIFT OF THE NILE Egypt is readily recognizable on the map today as an angular wedge of northeastern Africa and a chunk of southwestern Asia. It covers slightly more than a million square kilometers, and at the beginning of the twenty-first century it was inhabited by approximately seventy-five million people. The capital of Egypt, Cairo, with its population of more than sixteen million, is the largest city on the African continent. But to envision Egypt historically, and to understand its geographical essence, one must think first about the Nile, the longest river in the world, and a river that flows through the Sahara, the largest desert in the world. When the Greek traveler Herodotus described Egypt as the gift of the Nile in the fifth century BC, he was probably just repeating what was already a well-worn phrase, but one true since long before historical memory and no less so now. Rainfall is insignificant in the valley of the Nile, and not abundant in the Delta, so that virtually all of Egypt's water comes from the Nile, and even with the amazing de