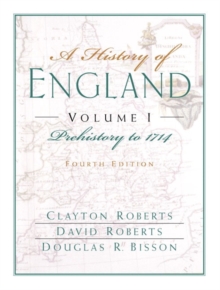 Product Description The first volume in a two-volume set, this book provides a broad, narrative account of English history from the first settlers in the Paleolithic Age to the 1714. It draws on the most up-to-date primary and secondary research to illuminate the full range of England's social, economic, cultural, and political past, and focuses on how and why events occurred. It stresses dominant themes in English history without espousing any single interpretation, and considers events in Scotland, Wales, and Ireland as they affected developments in England. KEY TOPICS: The Land And The People; Roman Britain: 55 B.C.-450 A.D.19; Anglo-Saxon England: 450-1066; Norman England; The Angevins; The Thirteenth Century: 1216-1307; War And Crisis: 1307-1399; Lancaster And York: 1399-1485; The Reign Of Henry Vii: 1485-1509; War And Reformation: 1509-1547; Protestant And Catholic: 1547-1558; Elizabethan England: 1558-1603; Early Stuart England: 1603-1640; The English Revolution: 1640-1660; Restoration And Revolution: 1660-1689; War And Society. MARKET: For anyone interested in the History of England. From the Back Cover A History of England, Volume I: Prehistory to 1714 incorporates recent scholarship into a master narrative that encompasses England's social, economic, cultural, intellectual, and political history. This account traces how and why critical events occurred. Other significant features: stresses dominant themes in English history?the coming of Christianity, the creation of the English monarchy, the impact of the Norman conquest and much more. discusses events in Scotland, Wales, and Ireland as they affect developments in England. offers section headings, genealogical charts, a list of kings and queens, and improved maps. includes new material on the cultural effects of the bubonic plague of the fourteenth century. provides suggested Further Reading at the end of each chapter, focusing on the most important books on each era (updated to include recent publications). Excerpt. Â© Reprinted by permission. All rights reserved. Ten years have passed since the third edition of this book appeared. The last decade has been an eventful one for the peoples of the British Isles: The longest serving prime minister of the century was removed from power by her own colleagues; a moribund Labor Party, out of office for almost two decades, revived to score its greatest electoral triumph under the youngest man to serve as prime minister since 1812; after 30 years of sectarian conflict in Northern Ireland, hopes for a lasting peace blossomed on a rainy Easter Sunday; the Channel Tunnel, the fear and folly of an earlier age when France and Britain were enemies, was completed by the joint effort of the two nations; the tragic death of Diana, Princess of Wales, was greeted with such an outpouring of public grief that age-old stereotypes about British reserve vanished in a fortnight. The narrative of recent developments will constitute part of any new edition. But history is about continuities as well as new departures. This is true not only in the making of history but in the writing of it. It is in that spirit that I carry on the work of Clayton and David Roberts. Their work has succeeded in providing a master narrative of the key events of England's history while not neglecting the impact that these events have had on Scotland, Wales, and Ireland. This narrative has not ignored the interpretive dimension at the core of the historical enterprise but has incorporated the fresh perspective and methods that recent scholarship has brought to the study of England's past. Their graceful prose, trenchant analysis, and unobtrusive learning are virtues I can only hope to emulate. I wish to thank the editorial staff of Prentice Hall for their cheerfully rendered assistance. I owe a special debt to Emsal Hasan, whose encouraging words have blessed the project. My Belmont colleague, Richard Fallis, Dean of the College of Arts and Sciences, has suppor