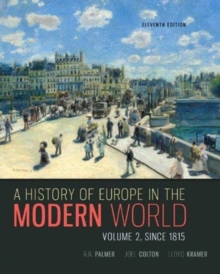 A HISTORY OF EUROPE IN THE MODERN WORLD, VOLUME 2

Product Description As the new title reflects, Palmerâ€™s A History of Europe in the Modern World maintains its well-established historical authority, while focusing more specifically on Europeâ€™s prominent role in modern global exchanges, nation building, transnational commercial systems, colonial empires, and cultural transitions. Combining concise accounts of specific nations and national differences with a wide-ranging, comparative analysis of international events, this updated edition of a classic text carefully examines the whole modern history of Europeans and their perpetually changing societies. About the Author Joel Colton was born in New York City. A graduate of the City College of New York, he served as a military intelligence officer in Europe in World War II, and received his PhD from Columbia University in 1950. He served on the faculty of Duke University for more than four decades, chairing the History Department from 1967 to 1974 and chairing the university's academic council from 1971 to 1973. On leave from Duke, he served from 1974 to 1981 with the Rockefeller Foundation in New York as director of its research and fellowship program in the humanities. In 1986 Duke voted him a distinguished teaching award. He received Guggenheim, Rockefeller Foundation, and National Endowment for the Humanities fellowships. He served on the editorial boards of the Journal of Modern History, French Historical Studies, and Historical Abstracts, and was co-president of the International Commission on the History of Social Movements and Social Structures. In 1979 he was elected a Fellow of the American Academy of Arts and Sciences. His writings include Compulsory Labor Arbitration in France, 1936- 1939 (1951), LÃ©on Blum: Humanist in Politics (1966, 1987), for which he received a Mayflower Award; Twentieth Century (1968, 1980) in the Time-Life Great Ages of Man series; and numerous contributions to journals, encyclopedias, and collaborative volumes. He died in 2011, having served as the distinguished co-author of A History of the Modern World for every revision after the first edition. R.R. Palmer was born in Chicago. After graduating from the University of Chicago, he received his PhD from Cornell University in 1934. From 1936 to 1963 he taught at Princeton University, taking leave during World War II to work on historical projects in Washington, DC. In 1963 he moved to Washington University in St. Louis to serve as dean of arts and sciences, and in 1969 he resumed his career in teaching and research, this time at Yale. After his retirement he lived in Princeton, where he was affiliated with the Institute for Advanced Study, and then in a retirement community in Newtown, Pennsylvania. Of the numerous books he wrote, translated, and edited, three of the most important are his Catholics and Unbelievers in Eighteenth-Century France (1939); Twelve Who Ruled: The Year of the Terror in the French Revolution (1941, 1989); and his two-volume Age of the Democratic Revolution (1959, 1964), the first volume of which won the Bancroft Prize. He served as president of the American Historical Association in 1970, received honorary degrees from universities in the United States and abroad, and was awarded the Antonio Feltrinelli International Prize for History in Rome in 1990. He was a long-time Fellow of the American Philosophical Society and of the American Academy of Arts and Sciences. He died in 2002, widely recognized as one of the preeminent historians of his generation. Lloyd Kramer was born in Maryville, Tennessee, and graduated from Maryville College. He received his PhD from Cornell University in 1983. Before entering Cornell, he was a teacher in Hong Kong and he traveled widely in Asia. After completing his graduate studies, he taught at Stanford University and Northwestern University. Since 1986 he has been a member of the faculty at the University of North Carolina at Chapel Hill, where he is currently a professor of history a