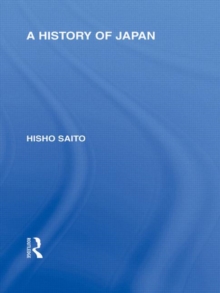 A HISTORY OF JAPAN

This volume presents the Japanese version of the history of Japan from its origins, through the subjection of Korea, the introduction of Chinese culture, rebellion in Korea, Buddhism, Taika reforms, Ainu insurrection, the founding of Kyoto as the capital, the power of Fujiwara, the founding of the Kamakura Shogunate, Hojo family, Ashikaga Shogunate, Oda & Toyotomi families, Tokugawa Shogunate, the beginning of the Meiji, relations with Korea, Russia and the Chino-Japanese war of 1894, ending with the Russo-Japanese war of 1904.