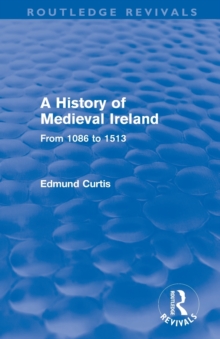 First published in 1923, this formative history of Ireland is an extensive study of the period from 1086 â€“ 1513. Beginning with the Oâ€™Brien High Kinship, Edmund Curtis takes us through the Anglo-Norman conquest and its sequel, ending with the death of Gerald â€˜the Great Earlâ€™ of Kildare in 1513, a date when the second English conquest of Ireland (the â€˜Tudor Reconquestâ€™) became imminent. This is a reissue of a definitive landmark study of Irish history by one of greatest Irish historians of the twentieth century.