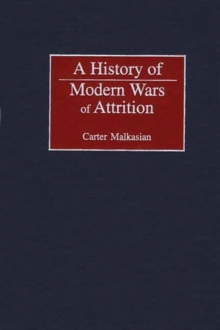 A HISTORY OF MODERN WARS OF ATTRITION

A war of attrition is usually conceptualized as a bloody slogging match, epitomized by imagery of futile frontal assaults on the Western Front of the First World War. As such, many academics, politicians, and military officers currently consider attrition to be a wholly undesirable method of warfare. This first book-length study of wars of attrition challenges this viewpoint. A historical analysis of the strategic thought behind attrition demonstrates that it was often implemented to conserve casualties, not to engage in a bloody senseless assault. Moreover, attrition frequently proved an effective means of attaining a state's political aims in warfare, particularly in serving as a preliminary to decisive warfare, reducing risk of escalation, and coercing an opponent in negotiations.

Malkasian analyzes the thought of commanders who implemented policies of attrition from 1789 to the present. His study includes figures central to the study of war, such as the Duke of Wellington, Carl von Clausewitz, B. H. Liddell Hart, General William Slim, General Douglas MacArthur, General Matthew Ridgeway, and General William Westmoreland. While special attention is devoted to the Second World War in the Pacific and the Korean War, this study notes the utility of attrition during the Cold War, as the risk of a Third World War rendered more aggressive strategies unattractive. Increasingly, the United States finds itself facing conflicts that are not amenable to a decisive military solution in which opponents seek prolonged war that will inflict as many casualties as possible on American forces.