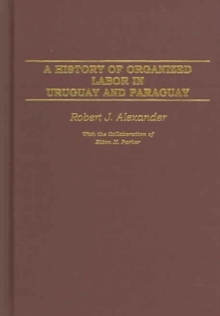 A HISTORY OF ORGANIZED LABOR IN URUGUAY AND PARAGUAY

In this volume, Alexander sketches the history of organized labor in the countries of Uruguay and Paraguay. He covers such topics as the role of organized labor in the economics and politics of these two countries and their relations with the international labor movement. It is based on extensive personal contacts of the author with the labor movements over almost half a century. It may seem unusual at first to have both of these countries in one volume because there does not exist anywhere else in Latin America such historical political disparity between neighboring countries as that between Uruguay and Paraguay. However in spite of the political contrasts, there are certain similarities in the history of the labor movements of these two republics.

In both Uruguay and Paraguay, the earliest organizations to be founded by the workers were mutual benefit societies, rather than trade unions. But in both countries, trade unions which sought to protect their members against employers began to appear. By the early years of the 20th century, these unions began to demand that employers negotiate with them, and there were an increasing number of strikes, attempting to make these demands effective. There were soon efforts to bring together the various trade unions into broader local, national, and international labor organizations.