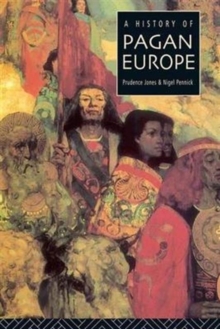 A HISTORY OF PAGAN EUROPE

Product Description The first comprehensive study of its kind, this fullyÂ illustratedÂ book establishes Paganism as a persistent force in European history with a profound influence on modern thinking. From the serpent goddesses of ancient Crete to modern nature-worship and the restoration of the indigenous religions of eastern Europe, this wide-ranging book offers a rewarding new perspective of European history. In this definitive study, Prudence Jones and Nigel Pennick draw together the fragmented sources of Europe's native religions and establish the coherence and continuity of the Pagan world vision. Exploring Paganism as it developed from the ancient world through the Celtic and Germanic periods, the authors finally appraise modern Paganism and its apparent causes as well as addressing feminist spirituality, the heritage movement, nature-worship and `deep' ecology This innovative and comprehensive history of European Paganism will provide a stimulating, reliable guide to this popular dimension of religious culture for the academic and the general reader alike. Amazon.com Review This is a book that was recommended to me, and I have to admit that it is one of the best scholarly texts on the history of European Pagan religions. Jones and Pennick trace the evolution of Pagan religions in Greece and Rome, the religions of the Celts, Paganism in Germany and the Balkans, and the current Pagan revival. Filled with concise information and illustrations which add to the content rather than distracting from it, I'm sure I'll be referring to this book again in the future. From Library Journal This ambitious work endeavors to demonstrate how the indigenous spiritual traditions of Europe were not wiped out by various invaders but in fact constitute a kind of hidden history of Europe. Jones (Voices of the Circle: The Heritage of Western Paganism, Aquarian Bks., 1990) and Pennick (The Celtic Oracle, Aquarian Bks., 1992) wish to show how the various invaders of Europe adapted aspects of the pagan religions already in existence to fit within the framework of their own. All over Europe are found sacred groves and shrines to deities that were not a part of current religion before its arrival in the area. The authors assert that the original pagan religions of Europe were polytheistic and had goddess and nature elements (without the Fall) that were often incompatible with the invading group's belief system. A ubiquitous and fascinating theme is the role of the goddess and women in each religion. The authors are occasionally guilty of generalizations when trying to cover too long a period. Nevertheless, this work will satisfy those interested in a background for New Age spirituality. The bibliography is extensive, but the notes are sparse. Recommended for public and academic libraries.?Clay Williams, Bluefield State Coll. Lib., W. Va. Copyright 1995 Reed Business Information, Inc. Review "A general reader coming to the field for the first time could not hope for a better primer. It is a work at once objective and personal, scholarly and accessible, and broad in its focus, well capturing the intensity of individual places and moments." -Ronald Hutton, University of Bristol "Written with an insider's sensibility and an outsider's scholarly eye, this book is bound to appeal to a wide audience, from those who are fascinated by the early religious history of Europe and its fate, to those who describe their own spirituality as pagan. It is a rich, substantive book, full of interesting detail, and written in a clear, engaging and accessible style." -Tanya Luhrmann, University of California, San Diego "The authors set for themselves a formidable task: to 'describe the hidden history of Europe, the persistence of its native religion in various forms from ancient times right up to present day.' Arguing that the European native religious tradition 'has continued to exist and even to flourish more or less openly in the present day, when it