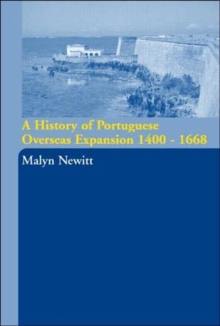 A HISTORY OF PORTUGUESE OVERSEAS EXPANSION 1400-1668

Product Description A History of Portuguese Overseas Expansion 1400-1668 provides an accessible survey of how the Portuguese became so influential during this period and how Portuguese settlements were founded in areas as far flung as Asia, Africa and South America. Malyn Newitt examines how the ideas and institutions of a late medieval society were deployed to aid expansion into Africa and the Atlantic islands, as well as how, through rivalry with Castile, this grew into a worldwide commercial enterprise. Finally, he considers how resilient the Portuguese overseas communities were, surviving wars and natural disasters, and fending off attacks by the more heavily armed English and Dutch invaders until well into the 1600s. Including a detailed bibliography and glossary, A History of Portuguese Overseas Expansion 1400-1668 is an invaluable textbook for all those studying this fascinating period of European expansion Review "Malyn Newittâ€™s aim simply has been â€˜to give a coherent account of a very complex topic for a new generation of students of European overseas expansionâ€™ and â€˜to restore a chronological perspective to the story of the empire.â€™ To do this in less than three hundred pages is no means a task, but the end product lives up to the promise. Anyone familiar with the history of the Portuguese empire should have it on the shelve." --Itinerario About the Author Malyn Newitt is Chales Boxer Professor of History at King's College London. His many publications include The First Portuguese Colonial Empire, A History of Mozambique and East Africa.