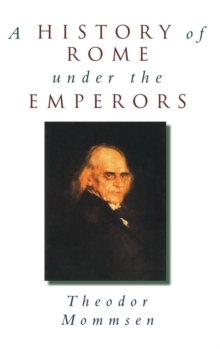 A HISTORY OF ROME UNDER THE EMPERORS

Product Description This book caused a sensation when it was published in Germany in 1992, and was front page news in many newspapers. For readers of English, it will be an authoritative survey of four centuries of Roman history, and a unique window on the German tradition of the last century. Theodor Mommsen (d. 1903) was one of the greatest Roman historians of the nineteenth century, and the only one ever to be awarded the Nobel Prize for Literature. His fame rests on his History of Rome as well as his work on Roman law and on the Roman provinces. But the work that would have concluded his history of Rome - which ran to the reign of Augustus - was never completed. This book represents that great lost work. In 1980 Alexander Demandt discovered in an antiquarian bookshop a full and detailed handwritten transcript of the lectures on the Roman Empire, which Mommsen gave for many years from 1863 to 1886, made by two of his students. This transcript has been edited to provide the authoritative reconstruction of the book Mommsen never wrote, A History of Rome Under the Emperors. Barbara and Alexander Demandt have carefully edited the text and provided detailed annotation and explanatory references. For the English edition, Professor Thomas Wiedemann has written an introduction which surveys Mommsen's position and influence in nineteenth century German scholarship and introduces his work for English speaking readers. From Booklist Theodor Mommsen (1818^-1903), a great German historian, never completed his projected four-volume history of Rome; the manuscript for the final volume, covering the period from the fall of the republic to the collapse of imperial authority in the west, was destroyed by fire in 1880. A century later, Alexander Demandt discovered extensive notes compiled by two of Mommsen's students on his lectures between 1863 and 1886. The result is this "reconstruction," which serves as a faithful rendering of Mommsen's interpretation of the imperial age. Mommsen focuses almost exclusively on political and military history. Those readers wishing detailed examination of Roman struggles for territory or political power will not be disappointed. His analysis of the response to barbarian incursions in the fourth century is particularly compelling. However, his lectures were predictably lacking in analysis of social and cultural factors, and no effort was made to view the Roman world from a "bottom up" perspective. Still, the publishing of this great historian's views is an invaluable contribution to classical historiography. Jay Freeman Review 'Reading this book now puts you in touch with two worlds: ancient Rome and the austere scholarship of nineteenth century, pre-Wilhelmine Germany.' - Daily Telegraph 'The editors do a valiant job in their introduction, trying to catch something of the spirit of this extraordinary man.' - The Independent 'Historians of Germany as well as Rome may profit from this splendid volume.' - The Times 'It has been superbly done. Demandt gives the full story both of Mommsen's history and the Hensels' lecture notes, while Wiedemann puts Mommsen in his historical context.' - Peter Levi, Sunday Telegraph 'It is a marvellous book, striking in detail, lucid and pleasingly unfair in argument, deeply sound in its root feelings and prejudices and genuinely helpful. It is the best book for those who dislike the Roman Empire, and is often very funny, and what underlies the remarkably dotty view he takes, for example of Virgil, is in itself most illuminating. It is years since I came across such a great book.' - Peter Levi, The Spectator Books of the Year 'This edition, with its extensive notes, is a tremendous achievement and a gift to anyone interested in the full story of the Roman Empire.' - Contemporary Review From the Back Cover Theodor Mommsen's History of Rome, for which he was awarded the Nobel Prize in 1902, was never completed. The manuscript of the fourth volume, the Histor