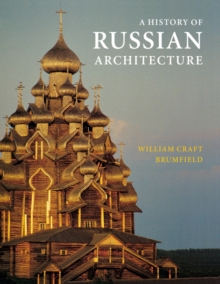 A HISTORY OF RUSSIAN ARCHITECTURE

Product Description Since its initial publication in 1993, A History of Russian Architecture has remained the most comprehensive study of the topic in English, a volume that defines the main components and sources for Russia's architectural traditions in their historical context, from the early medieval period to the present. This edition includes 80 new full-page color separations, many of which are published here for the first time, as well as a new Prologue and elegant photographic essay drawn from the author's research and fieldwork over the past decade in remote areas of the Russian north and Siberia. Subject to influences from east and west, Russian architecture's distinctive approaches to building are documented in four parts of this definitive study: early medieval Rus up to the Mongol invasion in the mid-twelfth century; the revival of architecture in Novgorod and Muscovy from the fourteenth to the seventeenth centuries; Peter the Great's cultural revolution, which extended through the eighteenth and nineteenth centuries; and the advent of modern, avant-garde, and monumental Soviet architecture. Beautifully illustrated and carefully researched, A History of Russian Architecture provides an invaluable cultural history that will be of interest to scholars and general audiences alike. View the William C. Brumfield Russian Architecture Collection online at http://content.lib.washington.edu/brumfieldweb/index.html Review "This is the benchmark in its field. No other single book has the same combination of comprehensive scope, scholarly authority, readable narrative and lavish production values."? Passport Moscow "The golden standard on the subject in the English language."?St. Vladimir's Theological Quarterly "Once in a great while, a book appears that both defines a scholarly discipline and sets a research agenda for the foreseeable future. Such a book is A History of Russian Architecture."?Choice "Lavishly illustrated, A History of Russian Architecture is a rich trove that will provide opportunities for exciting voyages of discovery and that will serve as an invaluable English-language reference."?New York Times Book Review "For anyone wishing to be knowledgeable about Russian architecture, Blumfield's text is a standard and a necessary work."?Midwest Book Review About the Author William Craft Brumfield is professor of Russian studies at Tulane University. He is the author of Lost Russia and The Origins of Modernism in Russian Architecture , among other books, and a member of the Russian Academy of Architecture and Construction Sciences.View the William C. Brumfield Russian Architecture Collection online at http://depts.washington.edu/ceir/brumfield