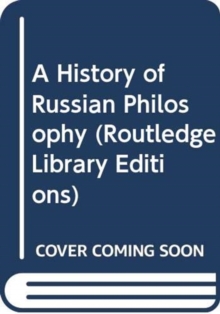 A HISTORY OF RUSSIAN PHILOSOPHY

This set reprints volumes that were orginally published by Routledge and Kegan Paul Ltd. in 1953. Landmark volumes at the time of their original publication, these titles do not merely expound the theoretical constructions of Russian philosophers, but also relate these constructions to the general conditions of Russian life. Volume One examines the historical conditions of the development of philosophy in Russia and explores the general features of Russian philosophy. It also surveys the principal works on the history of Russian philosophy. Volume Two includes biographies and examination of the themes of the following philosophers; Vladimir Solovyov, V.D. Kudryavtsev, N.F. Fyodorov and Later Hegelians such as Chicherin, Debolski and Bakunin. This volume also provides analysis of various schools of thought in Russian philosophy in the twentieth century, for example; Neo-Leibzianism, Modern Positivism and New-Marxism to name but a few.