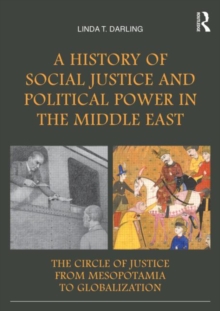 Product Description From ancient Mesopotamia into the 20th century, "the Circle of Justice" as a concept has pervaded Middle Eastern political thought and underpinned the exercise of power in the Middle East. The Circle of Justice depicts graphically how a governmentâ€™s justice toward the population generates political power, military strength, prosperity, and good administration. This book traces this set of relationships from its earliest appearance in the political writings of the Sumerians through four millennia of Middle Eastern culture. It explores how people conceptualized and acted upon this powerful insight, how they portrayed it in symbol, painting, and story, and how they transmitted it from one regime to the next. Moving towards the modern day, the author shows how, although the Circle of Justice was largely dropped from political discourse, it did not disappear from peopleâ€™s political culture and expectations of government. The book demonstrates the Circleâ€™s relevance to the Iranian Revolution and the rise of Islamist movements all over the Middle East, and suggests how the concept remains relevant in an age of capitalism. A "must read" for students, policymakers, and ordinary citizens, this book will be an important contribution to the areas of political history, political theory, Middle East studies and Orientalism. About the Author Linda Darling is Associate Professor in theÂ Department of History at theÂ University of Arizona.