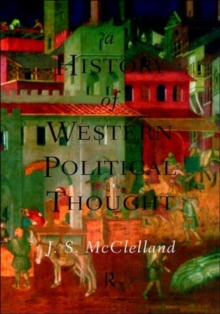 A HISTORY OF WESTERN POLITICAL THOUGHT

Product Description A History of Western Political Thought is an energetic and lucid account of the most important political thinkers and the enduring themes of the last two and a half millennia. Written with students of the history of political thought in mind, the book: * traces the development of political thought from Ancient Greece to the late twentieth century * focuses on individual thinkers and texts * includes 40 biographies of key political thinkers * offers original views of theorists and highlights those which may have been unjustly neglected * develops the wider themes of political thought and the relations between thinkers over time. From Library Journal This self-avowedly "old-fashioned...ac-count of great texts" begins with the Greeks and closes with modern reactions to liberalism; Hegel and Marx; "irrationalists" Pareto, Michels, LeBon, Freud, and the Fascists; and "anti-rationalists" Maurras and Oakeshotte. In a brief epilog, McClelland (politics, Univ. of Nottingham, England) comments on the collapse of dialog in our Nietzschean age. The author intentionally skimps on scholarly apparatus: there are few notes, bibliographies are brief, and citations from original texts are few and far between. And therein lies the rub. Although McClelland's insights are often good, at times even original, he fails to call in the thinkers' words to support his own arguments about their ideas and intent. Not until Chapter 11 (on Hobbes) does he even quote a thinker he discusses; half of the chapters are devoid of citation. The book reads like a set of lectures waiting for the illustrations that would flesh it out. Without these illustrations, the book is fatally flawed. Not recommended.?David Keymer, California State Univ., Stanislaus Copyright 1996 Reed Business Information, Inc. Review "Homeric in its scope and scale, this is an epic work of intellectual history. John McClelland transforms theory into lived experience, ideas into contested territory, philosophers into living characters he and his readers can talk to. Writing with a joyous, witty, passionate intensity, McClelland lets political ideas sing, dazzle, dominate, then give way to the next generation or fight back over new ground. The pitch and passion of his style, his enormous learning and talent for synthesizing and explaining difficult ideas, are masterly. I knew politics can be exciting, but until I read "A History of Western Political Thought I never knew how the various theories, ideologies and positions European history has produced can also be exciting and entertaining.." -Tom Paulin, poet and playwright "The task that McClelland has set himself is of course daunting. . . . But he goes about the matter with great gusto, and is always lucid and a pleasure to read--I have no doubt that the book would interest many people." -Roger Scruton "An easy, enjoyable and stimulating piece of work ... [It is] the idiosyncratic character of the text and the opportunities to challenge it on a variety of issues that will make it popular and exciting." -Tim Tilton, Indiana University "A real tour de force of a book that ranges from the Greeks to Michael Oakeshott. Brilliantly written and spiced with witty asides." -"Network "This magnificent history of Western political thought is ...witty, confident and sometimes extremely poetic." -Robert Skidelski, Evening Standard From the Back Cover The author traces the development and consolidation of a tradition of Western political thought from Ancient Greece through to the development of the modern state, the American Enlightenment, the rise of liberalism and the very different reactions it engendered, About the Author J. S. McClelland is Senior Lecturer in Politics at the University of Nottingham. He has held visiting posts at the University of Indiana at Bloomington and Sacramental State University, California. His previous publications include The French Right: From De Maistre to Maurras and The Crowd: From Plato to Canetti.