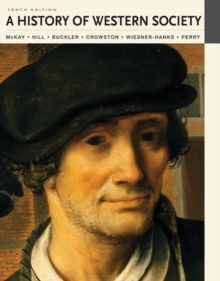 Product Description Now from Bedford/St. Martin's, A History of Western Society is one of the most successful textbooks available because it captures students' interest in the everyday life of the past and ties social history to the broad sweep of politics and culture. The tenth edition has been thoroughly revised to strengthen the text's readability, heighten its attention to daily life, and incorporate the insights of new scholarship, including an enhanced treatment of European exploration and a thoroughly revised post-1945 section. With a dynamic new design, new special features, and a completely revised and robust companion reader, this major revision makes the past memorable and accessible for a new generation of students and instructors. About the Author John P. McKay (Ph.D., University of California, Berkeley) is professor emeritus at the University of Illinois. He has written or edited numerous works, including the Herbert Baxter Adams Prize-winning book Pioneers for Profit: Foreign Entrepreneurship and Russian Industrialization, 1885-1913 (1970) and Tramways and Trolleys: The Rise of Urban Mass Transport in Europe (1976).Â  He most recently contributed to Imagining the Twentieth Century (1997). Â  Bennett D. Hill (Ph.D., Princeton), late of the University of Illinois, was the history department chair from 1978 to 1981. He published English Cistercian Monasteries and Their Patrons in the Twelfth Century (1968), Church and State in the Middle Ages (1970), and numerous articles and reviews, and was one of the contributing editors to The Encyclopedia of World History (2001). A Benedictine monk of St. Anselm's Abbey in Washington, D.C., he was also a visiting professor at Georgetown University. Â  John Buckler (Ph.D., Harvard University) taught history at the University of Illinois.Â  Published books include Theban Hegemony, 371-362 B.C. (1980), Philip II and the Sacred War (1989), and Aegean Greece in the Fourth Century B.C. (2003). With Hans Beck, he most recently published Central Greece and the Politics of Power in the Fourth Century (2007). Â  Clare Haru Crowston (Ph.D., Cornell University) teaches at the University of Illinois, where she is currently associate professor of history. She is the author of Fabricating Women: The Seamstresses of Old Regime France, 1675-1791 (2001), which won the Berkshire and Hagley Prizes. She edited two special issues of the Journal of Women's History (vol. 18, nos. 3 and 4), has published numerous journal articles and reviews, and is a past president of the Society for French Historical Studies and a former chair of the Pinkney Prize Committee. Â  Merry E. Wiesner-Hanks (Ph.D., University of Wisconsin-Madison) taught first at Augustana College in Illinois, and since 1985 at the University of Wisconsin-Milwaukee, where she is currently UWM Distinguished Professor in the department of history. She is the coeditor of the Sixteenth Century Journal and the author or editor of more than twenty books, most recently The Marvelous Hairy Girls: The Gonzales Sisters and Their Worlds (2009) and Gender in History (2nd ed., 2010). She currently serves as the Chief Reader for Advanced Placement World History. Â  Joe Perry (Ph.D., University of Illinois at Urbana-Champaign) is Associate Professor of modern German and European history at Georgia State University. He has published numerous articles and is author of the recently published book Christmas in Germany: A Cultural History (2010). His current research interests include issues of consumption, gender, and television in East and West Germany after World War II.