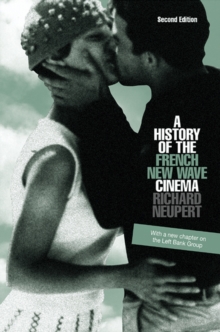 Product Description The French New Wave cinema is arguably the most fascinating of all film movements, famous for its exuberance, daring, and avant-garde techniques. A History of the French New Wave Cinema offers a fresh look at the social, economic, and aesthetic mechanisms that shaped French film in the 1950s, as well as detailed studies of the most important New Wave movies of the late 1950s and early 1960s.Richard Neupert first tracks the precursors to New Wave cinema, showing how they provided blueprints for those who would follow. He then demonstrates that it was a core group of critics-turned-directors from the magazine Cahiers du CinÃ©maâ€”especially FranÃ§ois Truffaut, Claude Chabrol, and Jean-Luc Godardâ€”who really revealed that filmmaking was changing forever. Later, their cohorts Eric Rohmer, Jacques Rivette, Jacques Doniol-Valcroze, and Pierre Kast continued in their own unique ways to expand the range and depth of the New Wave.Â In an exciting new chapter, Neupert explores the subgroup of French film practice known as the Left Bank Group, which included directors such as Alain Resnais and AgnÃ¨s Varda. With the addition of this new material and an updated conclusion, Neupert presents a comprehensive review of the stunning variety of movies to come out of this important era in filmmaking. Review "Neupert offers brilliant analyses, whether of familiar or neglected films . . . [giving] a masterful sense of the movement, its sources, character, and its continuing influence. Essential."â€” Choice "Refreshingly jargon-free and full of interesting details and anecdotes, this book is a pleasure to read."â€” Library Journal From the Publisher 2003 Choice Outstanding Academic Title About the Author Richard Neupert is Josiah Meigs Distinguished Teaching Professor of Film Studies at the University of Georgia. He is the author of The End: Closure and Narration in the Cinema and his translations include Aesthetics of Film and French New Wave: An Artistic School.