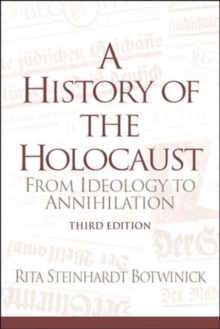 A HISTORY OF THE HOLOCAUST: FROM IDEOLOGY TO ANNIHILATION

Product Description Told with scrupulous care for accuracy, this book examines the causes and events of the Holocaust, giving important background information on Jewish life in Europe, on the functions of the hierarchy within the Nazi government, and the psychological foundations of prejudice. Controversial topics cover specific issues, such as: was the Holocaust the result of centuries of anti-Semitism? Was Germany's support of the Nazi dictatorship widespread? Was the Holocaust premeditated? Was there signficant Jewish resistance? When did the world learn of the Holocaust? How should the actions of the Judenraete be evaluated? How did the Righteous Gentiles remain true to their ethical standards? Can there be forgiveness? Did ordinary men commit extraordinary evil? For anyone who wants a clearly-written, completely factual account of the Holocaust in Europe during the Second World War. From the Back Cover New to the Third Edition: Contemporary evaluations of the causes of Hitler's hatred for the Jews, based on new research, new approaches, and new ideas. This new coverage gives students updated material on current German/Jewish relations and asks students to evaluate the present-day environment. "Can it Happen Again?" feature examines genocides which have occurred since the Second World War. New final chapter: Aftermath covers what happened to survivors, the post-war trials of the Nazi war criminals, and the division and occupation of Germany after the Allied invasion, providing students with more complete and updated information about this period of history and its aftermath. Updated bibliography including Websites, providing students with the latest publications in Holocaust history. Excerpt. Â© Reprinted by permission. All rights reserved. This text is the product of four decades of teaching the history of the Holocaust. It is intended to meet the need for a single volume on the topic and intended for use by the average university student. Although most high schools require some instruction on the fate of the Jews during the Nazi era, most can only devote a few hours to the subject. As a result, students are left with some superficial notions on the causes and implications of the Holocaust. This book seeks to explain the sequence of events that ended with mass graves and mounds of human ashes. Questions that arose in class discussions provided insight to specific insufficiencies or difficulties experienced by the students and whenever possible, relevant material was incorporated into the course material. Why a new edition? The purpose of a revision is to update a text so that it may reflect new research, new approaches, new ideas. The publisher aids in this process by providing the author with the views and criticism of several professors who are experts in the field. These are thoughtfully considered in composing a new edition. Also, the author has the opportunity to make improvements in style, correct errors which inevitably occur, and update the bibliography. Most importantly, a revision offers the opportunity to include new considerations on the needs of students who use this text. The second edition A History of the Holocaust included a summary on the fate 9f the Jewish survivors. Students were invariably concerned about their lives immediately after liberation from the camps. This, the third edition, considers another issue which is raised in nearly every class: Can it happen again? The ensuing discussion soon turns to instances of man's inhumanity to man which have occurred since the end of the Second World War. Whether called tribal warfare, ethnic cleansing, or political restructuring, the suffering of innocent victims is equally tragic. The picture which emerges is pessimistic at best, despairing at worst. But the ability to learn from the past is not a totally bleak picture; the current history of Germany allows us to hope that change is possible. The new material in this edition deals with the present-day relat