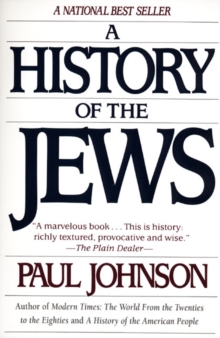 A HISTORY OF THE JEWS

Product Description A national bestseller, this brilliant 4000 year survey covers not only Jewish history but he impact of Jewish genius and imagination on the world. By the author of Modern Times: The World From the Twenties to the Eighties. Amazon.com Review Paul Johnson says that writing A History of the Jews was like writing a history of the world "seen from the viewpoint of a learned and intelligent victim." Johnson's history begins with the Bible and ends with the establishment of the State of Israel. Throughout, Johnson's history is driven by a philosophical interest: "The Jews," he writes, "stand right at the centre of the perennial attempt to give human life the dignity of a purpose. Does their own history suggest that such attempts are worth making? Or does it reveal their essential futility?" Johnson's history is lucid, thorough, and--as one would expect of almost any project with such a broad scope--a little wrong-headed. By the end of the book, readers will be grateful for Johnson's questioning of the Jews' confidence in their cosmic significance. However, readers may also be a little annoyed by his energetic inquiries as to whether this significance was man-made or providentially provided. Either way, it's a given: for a historian of Israel, this should adequately settle the question. Johnson's 600-page history is probably the best we've got by a living gentile--which is no small accomplishment at all. -- Michael Joseph Gross Review "A marvelous book . . . This is history: richly textured, provocative and wise." -- -- The Plain Dealer "A tour de force...A remarkable achievement." -- -- Aruthur Hertzberg, The New York Times Book Review "An absorbing, provocativem well-writen, often moving book, an insightful and impassioned blend of history and myth, story and interpretation." -- -- Merle Rubin, Christian Science Monitor "An extraordinary amount of useful information." -- -- New York Review of Books About the Author Paul Johnson is a historian whose work ranges over the millennia and the whole gamut of human activities. He regularly writes book reviews for several UK magazines and newspapers, such as the Literary Review and The Spectator, and he lectures around the world. He lives in London, England.