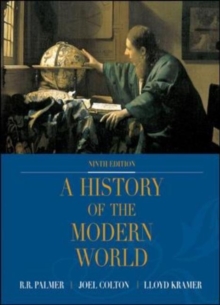 A HISTORY OF THE MODERN WORLD

Product Description Conceived and written as a history of the modern world rather than a truncated Western Civilization book, this text is one of the most highly praised history texts ever published. It has been adopted at more than 1000 schools and has been translated into six languages. Lloyd Kramer joins the author team for this ninth edition that includes two new color inserts highlighting fine art, additional pedagogy to guide students through challenging material, and full, up-to-date inclusion of current events. Now packaged with PowerWeb, a dynamic course-specific rather than book-specific supplement that engages your students in three levels of resource materials and provides a true avenue to extending learning about a subject, A History of the Modern World is a necessity in any world history course. About the Author R.R. Palmer received his B.A. from the University of Chicago, his PhD from Cornell University, and honorary degrees from the Universities of Uppsala and Toulouse. He taught at Princeton University, Washington University, and Yale University before retiring in 1977. The author of Twelve Who Ruled: The Year of the Terror in the French Revolution, Age of the Democratic Revolution, The World of the French Revolution, and The Improvement of Humanity: Education and the French Revolution, Palmer has also translated such books as Georges Lefebvre's, Coming of the French Revolution, Louis Bergeron's, France Under Napoleon, and Jean-Paul Bertaud's, Army of the French Revolution and has served as editor and translator of From Jacobin to Liberal: Marc-Antoine Jullian, 1775-1848. He served as President of the American Historical Association in 1970 and has been the recipient of the Bancroft Prize, 1960 and The Antonio Feltrinelli International Prize for History in Rome, 1990.