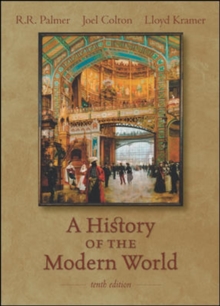 A HISTORY OF THE MODERN WORLD, WITH POWERWEB

Product Description A History of the Modern World is a careful, well-written narrative of major events from the late Middle Ages to the political and religious conflicts at the beginning of the twenty-first century. It offers a wide-ranging survey that helps readers understand both the complexities of great events (e.g., the French Revolution, the First World War, or the collapse of great imperial systems) and the importance of historical analysis. It also provides a careful summary of the modern political changes that have affected the social and cultural development of all modern cultures. Throughout the book's lifetime, A History of the Modern World has been hailed as an elegantly written historical narrative, filled with analysis and balanced historical insights as well as its traditional attention to the processes of historical change, conflict, and political transformations. The tenth edition has been updated to include the clear maps, the survey of global economic connections, the chronologies, the illustrations, and the up-to-date bibliographies that today's students need and expect. About the Author R.R. Palmer received his B.A. from the University of Chicago, his PhD from Cornell University, and honorary degrees from the Universities of Uppsala and Toulouse. He taught at Princeton University, Washington University, and Yale University before retiring in 1977. The author of Twelve Who Ruled: The Year of the Terror in the French Revolution, Age of the Democratic Revolution, The World of the French Revolution, and The Improvement of Humanity: Education and the French Revolution, Palmer has also translated such books as Georges Lefebvre's, Coming of the French Revolution, Louis Bergeron's, France Under Napoleon, and Jean-Paul Bertaud's, Army of the French Revolution and has served as editor and translator of From Jacobin to Liberal: Marc-Antoine Jullian, 1775-1848. He served as President of the American Historical Association in 1970 and has been the recipient of the Bancroft Prize, 1960 and The Antonio Feltrinelli International Prize for History in Rome, 1990. A specialist in modern and contemporary European history, Joel Colton taught at Duke University from 1947 to 1989 and chaired the History Department from 1967 to 1974. He is the author of books and articles in French history and became known to generations of students and teachers as co-author with the late Robert R. Palmer of the widely read college textbook A History of the Modern World, of which the tenth edition was published in 2007. At Duke he served for several years on the executive committee and as chair of the university's elected faculty body, the Academic Council. On extended leave from Duke, he was Director for Humanities at the Rockefeller Foundation in New York from 1974 to 1982, administering a domestic and international program in support of research and teaching in the humanities. After retiring at Duke in 1989, he continued his research and writing, participating in conferences at home and abroad, and serving as lecturer for alumni travel groups in Europe and Asia. Born August 23, 1918, and educated in New York City, to which he remained a frequent visitor, he graduated from Townsend Harris High School in 1933 and 1937 received his B.A. degree from the City College of New York, magna cum laude, with election to Phi Beta Kappa in his junior year and with honors in French and medals in Latin and French. Graduating in the Depression years, he began graduate work in history at Columbia University on a part-time basis while working full time as an assistant in the Registrar's office at the City College. He earned an M.A. degree at Columbia in 1940. Preparing himself also for high school teaching at a time when college teaching positions were scarce, he took a master's degree in education at the City College and taught at the Bronx High School of Science in New York as a teacher in training in 1941-42. Military service in the Second World War