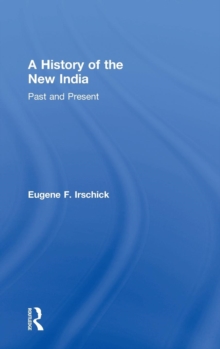 A HISTORY OF THE NEW INDIA: PAST AND PRESENT

Product Description Providing a different approach to the history of India than previously advocated, this textbook argues that there was constant interaction between peoples and cultures. This interactive, dialogic approach provides a clear understanding of how power and social relations operated in South Asia. Covering the history of India from Mughal times to the first years of Independence, the book consists of chapters divided roughly between political and thematic questions. Topics discussed include: Mughal warfare and military developments The construction of Indian culture Indian, regional and local political articulation Indiaâ€™s Independence and the end of British Rule Women and governmentality The rise of the Dalit movement As well as a detailed timeline that provides a useful overviewÂ of key events in the history of India, a set of background reading is included after each chapter for readers who wish to go beyond the remit of this text. Written in an accessible, narrative style, the textbook will be suitable in courses on Indian and South Asian history, as well as courses on world history and South Asian studies. Review "Eugene F. Irschick's A History of the New India is a convincing and theoretically nuanced account of certain critical moments in the everyday living of Indians. Irschick sheds light on a variety of topics and presents a thoroughly novel take on how colonized Indian women and men from different castes and classes actually self-fashioned, modified, learned to govern themselves, and realized their subjectivity. A must read..." Shailaja Paik, University of Cincinnati, USA "In this accessible textbook, Irschick has incorporated Mughal India as Early Modern India instead of focusing solely on colonial and post-colonial India. With his own extensive research, he has been diligent in providing examples from both north and south India, and includes examples from areas such as Punjab and Kerala that many overview histories frequently ignore." Barbara Ramusack, University of Cincinnati, USA About the Author Eugene F. Irschick was Professor of History at University of California, Berkeley, USA. In his research and published works,Â such as Dialogue and History: Constructing South India, 1795-1895 (1994),Â he suggests that the production of history and political structures is dialogic.Â He has been teaching courses on Indian history at UC Berkeley for 46 years. Much of the time during his early teaching years was focused on minority and separatist politics in south India during the 20th century. Recently, he has been teaching courses on womenâ€™s history in South Asia as well as courses on post-colonialism.