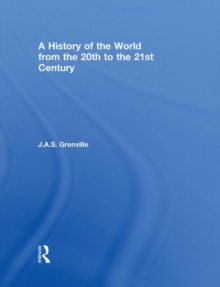 A HISTORY OF THE WORLD: FROM THE 20TH TO THE 21ST CENTURY

Product Description This second edition has been thoroughly updated and includes discussions on 9/11 and the second Gulf War, and takes into account the latest historical research.A comprehensive survey of the key events and personalities of this period throughout the world, it includes discussion on topics such as: the rivalry between European nations from 1900â€“1914 the Depression and the rise of Fascism during the 1920s and 1930s the global impact of the Cold War decolonization and its effects the continuing conflict in the Middle East. A History of the World provides a fascinating and authoritative account of the world since 1900, for general readers and students of world history alike. Review "Follows a relatively new trend among historians to abandon their sometimes narrow parochialism in favour of 'world history' his volume deals with more thematic issues like industrialization, the empowerment of women, the rise of environmental concerns and multinational corporations." - Foreign Affairs "Magnificently detailed, brilliantly written...An extraordinarily readable global history." - Parade Magazine About the Author J.A.S. Grenville is Professor of Modern History, Emeritus at the University of Birmingham. He is the author of a number of books, including Europe Reshaped, 1848-1878 (1999) and is co-editor of The Major International Treaties of the Twentieth Century: A History and Guide with Texts (2000).